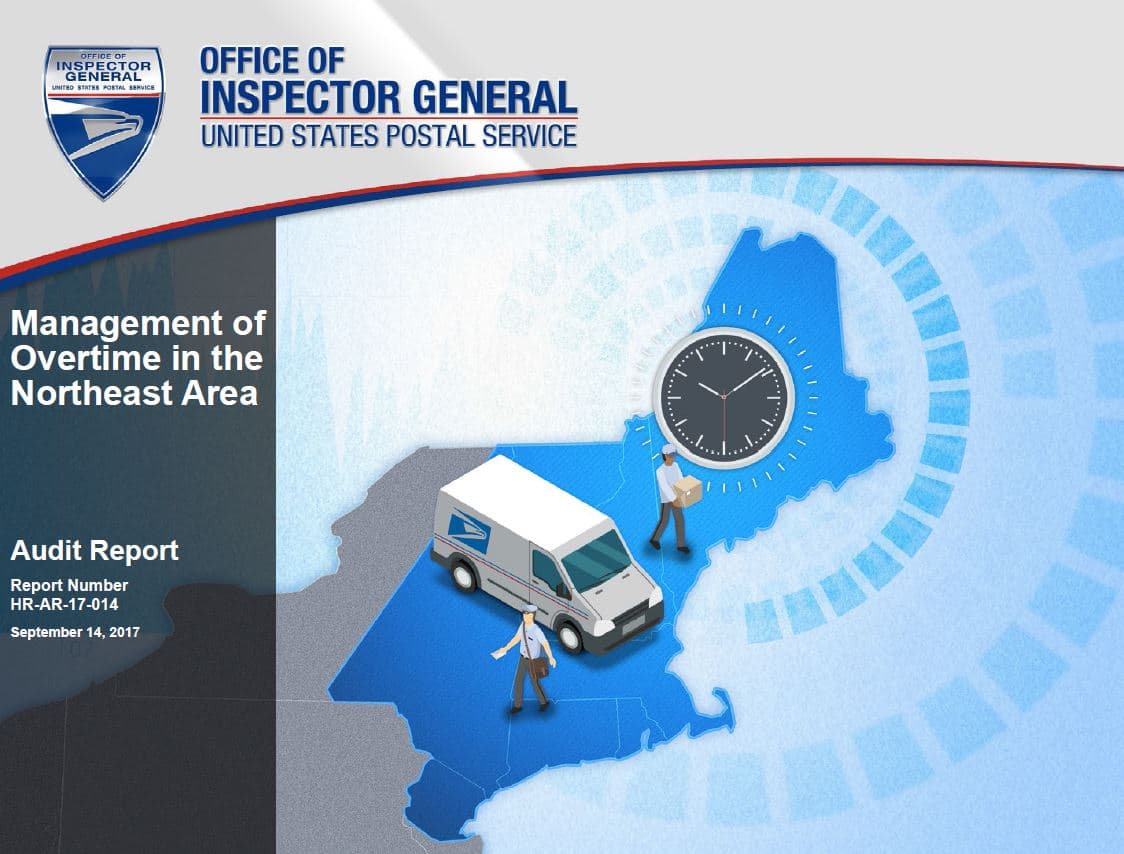 Overtime pay is a premium that the U.S. Postal Service pays its non-management employees. It is paid at one and one-half times the employee’s hourly rate for work performed in excess of eight paid hours a day or 40 paid hours a week. In addition to overtime pay, employees may be eligible for penalty overtime pay, which is paid at two times the employee’s hourly rate, under specific conditions.

Postal Service headquarters’ field budget group establishes the agency’s annual overtime budget, which is the planned percentage of overtime allocated for each Postal Service area. Once the budget is developed, areas allocate the respective overtime budgets to each district and facility.

For fiscal years (FY) 2015 and 2016, the Northeast Area’s (area) planned percentage of overtime was 8 and 10 percent of work hours, respectively. The area reported actual overtime percentage of workhours of 12 percent annually during this timeframe, which was the highest compared to the other six areas. During these periods, the area paid employees about $836 and $837 million in overtime and penalty overtime, respectively.

Our objective was to assess the management of overtime in the Northeast Area.

Management incurred challenges in retaining non-career employees. In FYs 2015 and 2016, the area was below its maximum complement of city carrier assistants by 19 and 14 percent, respectively. However, as of March 2017, the area was only 6 percent (435 positions) below complement due to implementing several initiatives to address employee retention. This resulted in the decrease in turnover rates compared to the prior year. Filling city carrier assistant vacancies could have mitigated at least 781,000 overtime hours (or $6.3 million).

Area and district management implemented actions to improve employee retention and the handling of increased package volumes; however, these factors continue to contribute to the area exceeding its planned overtime hours.

While not all inclusive, for FYs 2015 and 2016 these factors contributed to the area exceeding its planned overtime hours. As a result, the area incurred 3.5 million excessive overtime hours greater than 34 percent above the area’s calculated average amount of overtime above plan for FY 2016. This equated to $124.8 million in overtime cost. Overtime costs had a direct impact on the Postal Service’s controllable income, which primarily consists of workhours and transportation costs.

We did not assess employee assignment of overtime; however, we identified the area’s top 10 employees earning the highest overtime pay during FYs 2015 and 2016. Of the 10 employees, four were among the top 10 earners for both years. The top 10 employees received overtime and penalty overtime pay ranging from $70,435 to $112,669, which in some instances equated up to 69 percent over their gross pay and more than 200 percent of their regular salary. We referred this matter to the OIG Office of Investigations for further review.

We recommended management develop an action plan to promote accountability in managing the planned percentage of overtime and planned overtime hours; and address the contributing factors to overtime, to include but not limited to, unscheduled leave and inactive employees; and assess the effectiveness of management actions related to non-career employee retention and increased package volume growth.