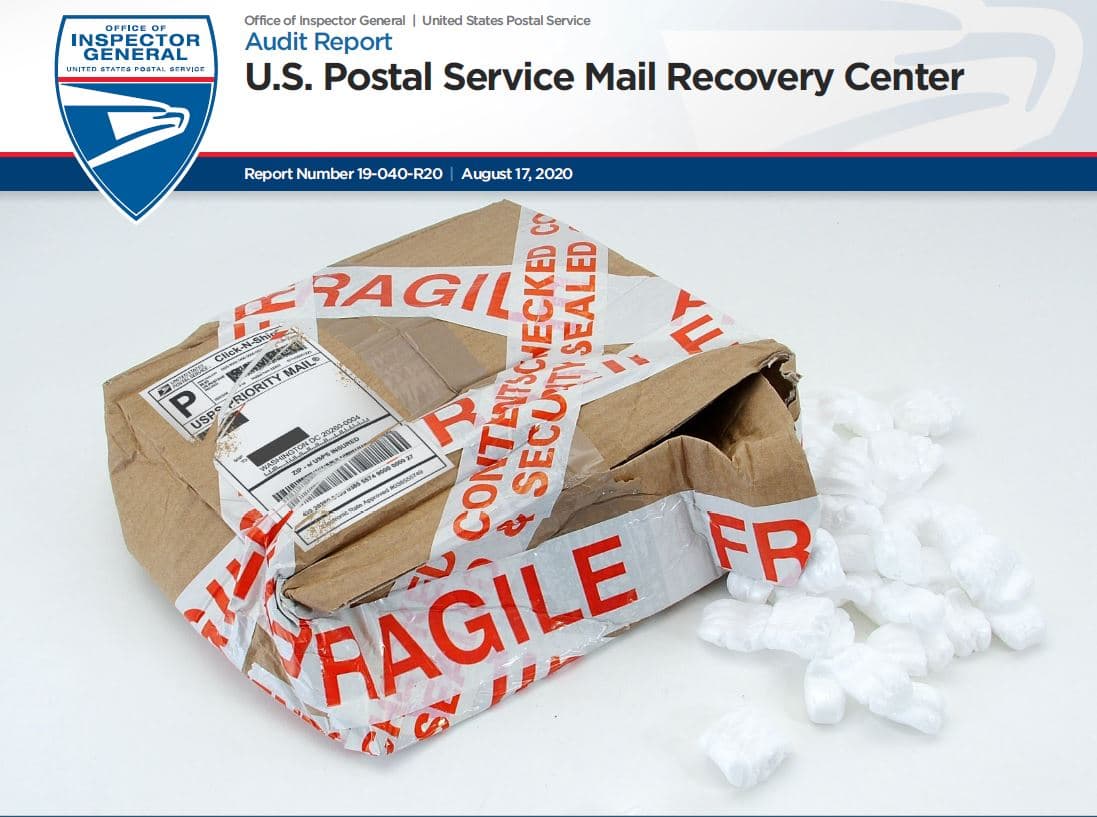 Our objective was to evaluate the effectiveness of U.S. Postal Service Mail Recovery Center (MRC) operations and identify opportunities for improvement.

The MRC is the Postal Service’s “lost and found” department, serving a vital customer service role by processing undeliverable and lost items. The MRC receives items deemed “undeliverable” from Postal Service facilities throughout the country, including post offices, delivery units, and distribution centers. These items may be designated as undeliverable because of incomplete addresses, damaged mailing labels, etc. The MRC received about 67 million items in fiscal year (FY) 2019.

MRC staff conduct preliminary assessments of items arriving at the MRC within a seven-day window and determine how each item will be handled as follows:

We completed our fieldwork before the President of the United States issued the national emergency declaration concerning the novel coronavirus disease outbreak (COVID-19) on March 13, 2020. The results of this audit do not reflect process and/or operational changes that may have occurred as a result of the pandemic.

MRC processing operations were not always effective. Specifically, items received at the MRC were not processed in a timely manner, as the MRC did not meet its seven-day acceptance processing goal from December 2017 to September 2019. We found some mail had not been processed for more than two months during our January 2020 observations. These delays occurred because of the following:

Handling these improper and unplanned workloads drove ineffective acceptance and processing operations at the MRC. These conditions were exacerbated by understaffing at the MRC during FYs 2018, 2019, and 2020. For example, the MRC had 84 clerks while it was authorized 104 as of November 2019.

We also determined MRC staff were not opening and examining all undeliverable First‑Class Mail in accordance with Postal Service policy. After reviewing 200 First‑Class mailpieces cleared by MRC staff for recycling, we found 16 pieces (8 percent) contained cash, checks, and gift cards totaling $1,692 —these items should have been originally identified upon examination by MRC staff. MRC management stated they were unaware of this policy.

MRC staff were also not effectively disposing of batteries and gift cards as follows:

We also noted a variety of opportunities to strengthen internal controls over cash, inventory of items being stored, and returning insured items:

During our audit, MRC management established a procedure to limit the number of trucks received daily and staffed their operation at full complement. As such, we will not make recommendations related to these issues.