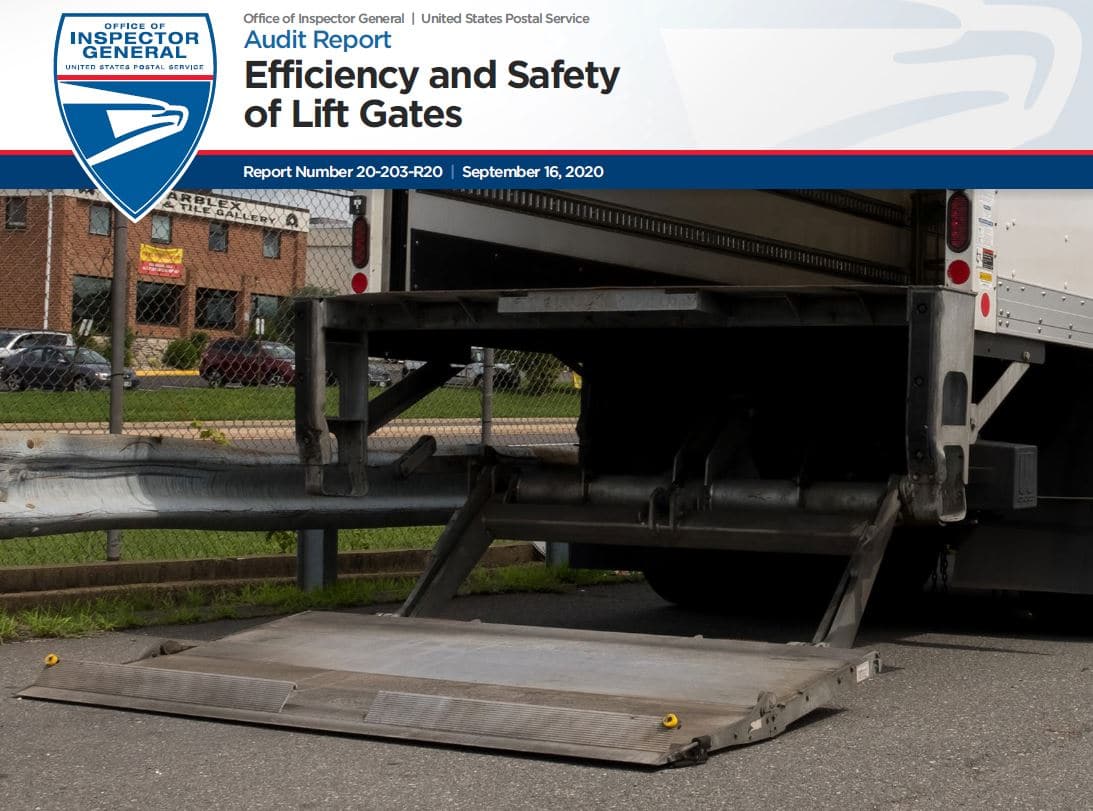 Our objective was to evaluate the efficiency and safety of lift gates used on U.S. Postal Service cargo vans.

Cargo vans with lift gates provide the ability to load/unload mail safely and effectively and were designed to save time and decrease the handling of MTE compared to cargo vans without lift gates. If an employee identifies unsafe conditions with a lift gate, they should complete and submit Postal Service (PS) Form 1767, Report of Hazard, Unsafe Condition, or Practice. A supervisor is then required to investigate the alleged hazard and resolve the issue if applicable.

The new tuck under lift gates installed on 7- and 11-ton cargo vans may not be as efficient as the previous lift gates and potential safety issues exist if PVS drivers aren’t trained properly.

As a result, the size and construction of the new tuck under lift gates is one of the factors that could lead to PVS drivers being at the facility longer, which increases the risk for late PVS trips. For example, we analyzed the amount of time PVS drivers spent at 54 selected stations that use the new lift gates. In January 2018, we reviewed 1,945 trips and found the average time (arrival and departure times) spent at stations without docks using the previous lift gates was 12.5 minutes. In comparison, in January 2020, we reviewed 547 trips and the average time spent at these same stations with the new lift gates was 16.8 minutes (a 34.4 percent increase).

Additionally, we found potential safety issues related to training and concerns from employees with the new tuck under lift gates that resulted in three Occupational Safety and Health Administration (OSHA) complaints, 55 PS Forms 1767, and two grievances filed. One of the OSHA complaints resulted in a fine of $5,783. We also conducted interviews and received comments from various users addressing safety concerns related to the tuck under lift gates. The main safety issues we identified were:

We surveyed transportation managers and supervisors, PVS analysts, vehicle maintenance managers, and area and district safety managers to see if the new lift gates improved the safety of loading/unloading MTE. We received 215 responses out of the 686 surveys sent (31 percent) but only 140 were familiar with the safety of the new lift gates. Of the 140 managers, supervisors, and analysts who responded, almost half either disagreed or strongly disagreed that the new lift gates improved safety. However, managers from Fleet Management and Employee Resource Management stated the purchase of new lift gates were not intended to improve safety since equipment is only purchased if it is safe.