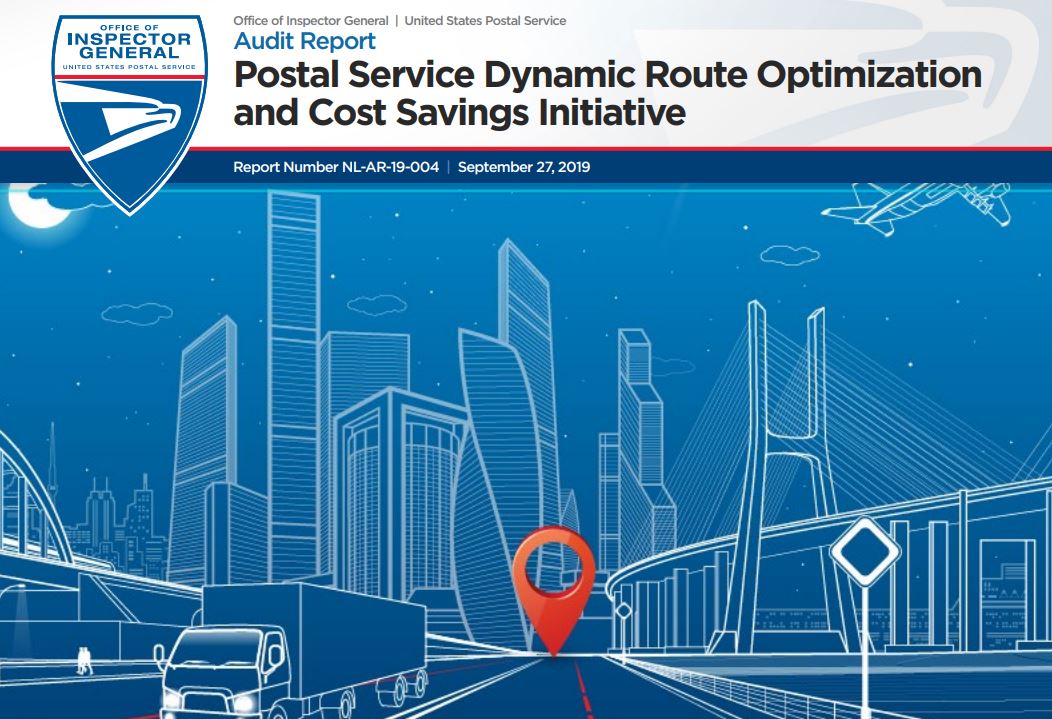 Our objective was to evaluate the cost savings for implementing the Postal Service’s Dynamic Route Optimization (DRO) initiative.

The Postal Service spent about $6.59 million piloting the initiative at the Dulles Processing and Distribution Center (P&DC), VA, in January 2016, and expanded it to the El Paso P&DC, TX, and Margaret L. Sellers P&DC, CA in September 2016.

The DRO initiative did not achieve planned cost savings for FYs 2017 and 2018 because the Postal Service did not identify and resolve program issues before national rollout and did not accurately measure related Key Performance Indicators (KPI).

Specifically, despite the Postal Service spending $32.72 million in total investments in FYs 2017 and 2018, at the time of our audit, 29 of the 34 sites (or 85 percent) had not fully optimized under DRO and were still running static routes. Four of the 29 static sites were one time optimized but converted back to static routing using the last dynamic manifest (frozen). Additionally, of the five sites that were reportedly fully optimized to dynamic routing, only one site was operating dynamically. Three sites required significant time and resources to manually adjust the weekly dynamic manifests to meet local transportation requirements. The remaining site continues to run frozen routes based on the initial optimization routes without following the dynamic manifest schedule. In addition, payments to the HCR suppliers for this site were inaccurately based on the dynamic manifest mileage.

These occurred because the Postal Service did not identify and resolve program issues before national rollout. Specifically:

Additionally, we found the Postal Service did not accurately measure the six program KPIs to reflect the actual initiative performance.

We determined that in FYs 2017 and 2018, 25 of the 34 DRO sites (or 74 percent) paid an RPM higher than they did under the previous fixed-price contracts. The overall RPM increased by 9.3 percent and did not achieve its planned national performance goal of a less than 8 percent increase. Additionally, while mileage was reduced by 7 percent, this was well short of the 12.5 percent mileage reduction goal.

Furthermore, in FYs 2017 and 2018, the Postal Service did not achieve the projected savings of $22.38 million, instead, the program incurred an additional $3.40 million in transportation contract costs for the 34 DRO sites. The Postal Service imputed indirect savings $8.54 million by applying inflationary factors to the RPM and fuel cost recovery, resulting in net imputed savings of $5.14 million. However, we determined the Postal Service used incorrect and inconsistent savings calculations by applying the inflationary factors overstating the imputed savings by $2.07 million.

Consequently, the Postal Service incurred questioned costs of about $16.36 million annually in FYs 2017 and 2018 for capital investment costs related to implementing the initiative.

During our audit Postal Service management provided additional documentation on steps they have initiated in FY 2019 to improve program implementation issues and concerns. For example, in March 2019, the Postal Service appointed an acting national program manager for the program. In addition, they developed a new Help Desk process using the Service Now System to track questions, problems, and concerns from DRO sites. Further, as of August 13, 2019, the Postal Service stated that five additional sites are reportedly fully optimized to dynamic routing, however we did not verify this information.