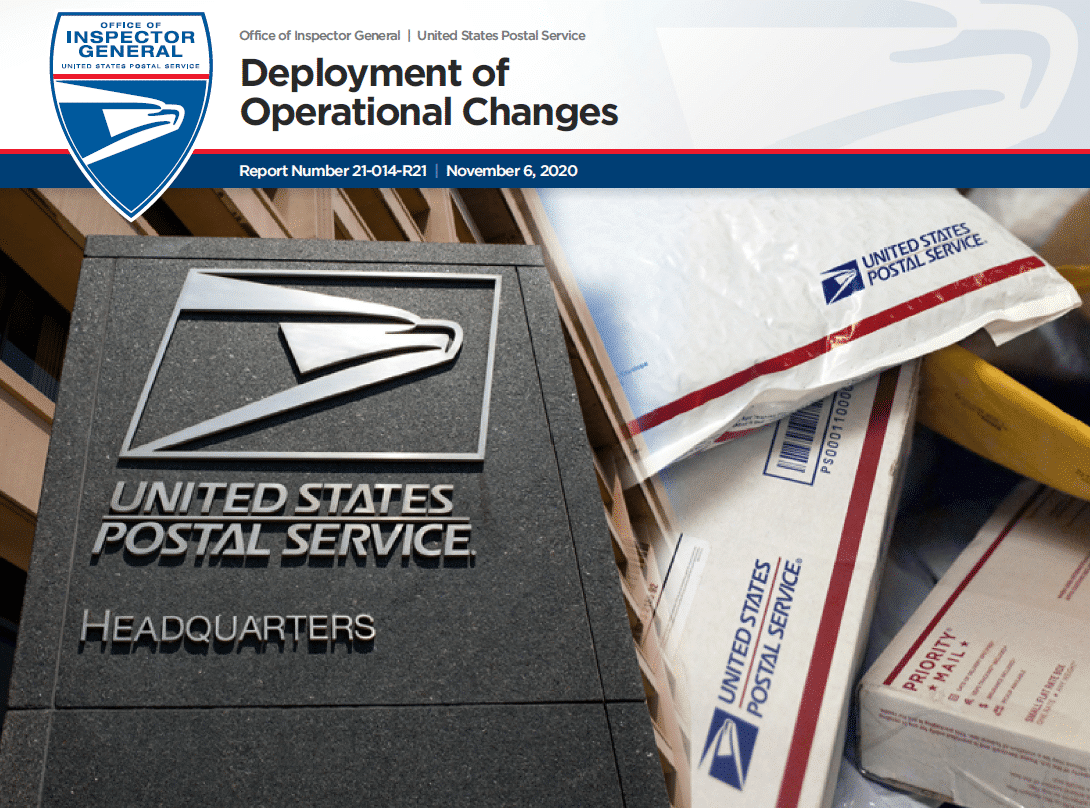 On October 19, 2020, we issued a report to the U.S. Postal Service Board of Governors that addressed specific questions asked by Members of Congress regarding modifications to Postal Service staffing and policies, mail service impacts, compliance with applicable laws and regulations, communication with Congress and customers, and the Postmaster General’s compliance with financial conflict of interest laws and regulations (Operational Changes to Mail Delivery – Report Number 20-292-R21). The objective of this report is to provide our evaluation of those operational changes to management with recommendations for corrective actions.

Termed “Do It Now FY Strategies,” these initiatives outlined changes from current operations in each function including mail processing, vehicle and maintenance, and post office operations (delivery and retail). They included eliminating pre-tour overtime in city delivery operations, elimination of certain mail processing operations on Saturday, and alignment of clerk workhours to workload. These initiatives were generated from and executed by operations executives, and were discussed at an introductory meeting with the new Postmaster General on July 7, 2020.

As we have noted in a series of reports, the Postal Service has struggled in recent years to meet mail service performance standards, which it measures based on mail speed and reliability. In FY 2019, it met annual performance targets for only seven of 22 mail products (32 percent). Our recent reports have also noted that the Postal Service has numerous opportunities for greater efficiencies and cost savings.

The collective results of these initiatives, combined with the ongoing employee availability challenges resulting from the pandemic, negatively impacted the quality and timeliness of mail delivery nationally. The Postal Service’s mail service performance significantly dropped beginning in July 2020, directly corresponding to implementation of the operational changes and initiatives.

Most notably, service performance indicators declined significantly in July 2020, for all mail products we reviewed:

To further evaluate these impacts, we conducted a non-statistical mail test of 300 mailpieces in August 2020. Our results showed [redacted] percent of Priority Letter Flats, 24 percent of Certified Letters, and 14 percent of First-Class Letters [redacted].

We also observed operations at five mail processing and eight delivery facilities in August 2020 and found delayed mail at all five mail processing facilities and significant amounts of delayed mail at seven of the eight delivery units. According to management at these facilities, the increased delayed mail was due to COVID-19 impacts, such as employee availability, increases in package volume, local directives to reduce overtime and a requirement for carriers to stop mail delivery at 8 p.m., and the restrictions on extra trips.

According to Postal Service officials, the service impacts caused by the operational changes were temporary. Based on our review of data from the first week of September, we noted service had improved from the July lows as follows:

Communications with Congress and Customers

According to Postal Service officials, the service impacts caused by the operational changes will not impact election mail for the upcoming 2020 election. The Postal Service has established processes for handling election mail and efforts have been ongoing to train and prepare their employees on Election Mail policies and procedures. Training includes proper postmarking, proper handling and processing, and recognition and use of Tag 191, which identifies ballots. The Postal Service is now also subject to preliminary orders from at least four federal district courts imposing additional requirements on the handling of election mail.

On August 18, 2020, the Postmaster General announced that he would cease removal and reconfiguration of mail processing equipment and postpone collection box removals until after the 2020 election to avoid the appearance of any impact on Election Mail. The ESAS pilot in Delivery Operations was also cancelled on that day.

In a September 21, 2020, memo to officers, executives, and managers, the Chief Retail and Delivery and Chief Logistics and Processing Operations officers disclosed that beginning October 1, 2020, the Postal Service would make additional resources available in all areas of operations, including collection, processing, delivery, and transportation to satisfy increased demand and unforeseen circumstances. They also provided clarifying guidance in the areas of overtime, hiring, retail hours, collection boxes, late and extra trips, mail processing, and election mail.

We recommended the Postmaster General instruct management to: