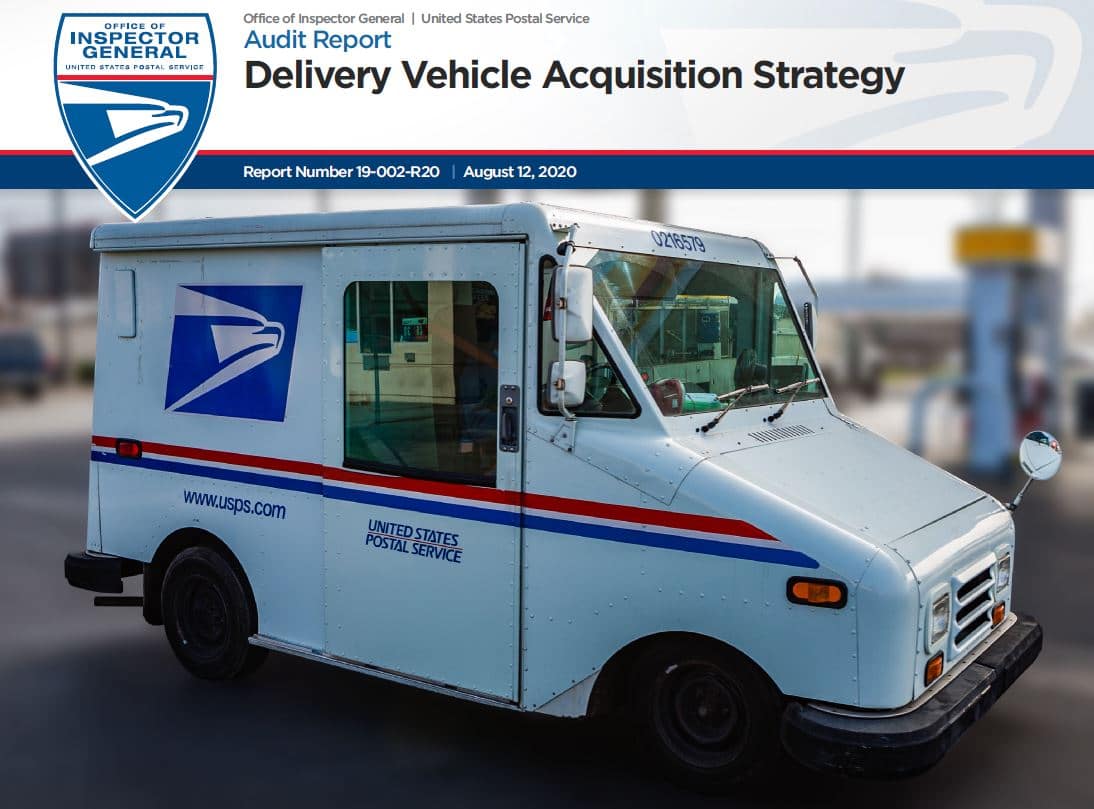 Our objective was to assess the Postal Service’s acquisition strategy for delivery and collection vehicles.

The backbone of the delivery fleet is the purpose-built, right-hand-drive Long Life Vehicle (LLV), which is used to deliver mail on city and rural routes across the country. The expected service life of these vehicles is 24 years and 69 percent of the current fleet is now between 25 and 32 years old.

The combined effect of aging vehicles, additional delivery points, and a changing mail mix increases the need for new delivery vehicles to meet operational demands six days a week. To address this need, the Postal Service has committed more than $2.3 billion to add or replace over 68,000 delivery and collection vehicles. In FY 2015, the Postal Service began planning the acquisition process for a new purpose-built, Next Generation Delivery Vehicle (NGDV) to start replacing the current LLV fleet beginning in FY 2018 through FY 2019. However, by the end of FY 2019, the Postal Service had not awarded the estimated $5-6 billion contract(s) for the production of the NGDV. Due to frequent changes to the NGDV acquisition timeline, the planned production deployment date is now scheduled for January 2022.

In recent months, the global COVID-19 pandemic has impacted many companies and industries both financially and operationally, including the Postal Service and the automotive industry. The Postal Service anticipates a substantial drop in mail volume and the long-term impact is forecasted to be significant. We completed our fieldwork before the President of the United States issued the national emergency declaration concerning the novel coronavirus disease outbreak (COVID-19) on March 13, 2020. The results of this audit do not reflect any process and/or organizational changes that may have occurred as a result of the pandemic.

The Postal Service’s vehicle acquisition strategy, which uses modeling of current and projected operational data, was generally adequate for acquisition of a mixed vehicle delivery fleet. However, that strategy encountered significant implementation delays in producing a viable purpose-built NGDV by the target deployment date of 2019. Specifically, the following delays occurred during NGDV development:

Management stated the original timelines presented were not sufficient and more time was needed to develop and test the prototypes. Management adjusted the NGDV testing and deployment schedule six times between April 2015 and September 2019 to account for additional time needed to complete the prototype development and testing process.

The Postal Service noted that due to the competitive nature of the NGDV acquisition and to stay unbiased, they intentionally limited oversight of suppliers’ design and build activities throughout the duration of the prototype phase to prevent any potential conflicts in the competitive process. The Postal Service’s Engineering group conducted 46 monthly virtual meetings with suppliers, two in-person design meetings with four of the five suppliers at their facilities and no in-person design meetings with one supplier located outside the U.S. where travel restrictions prevented onsite visits and alternative monitoring processes had to be used. While we acknowledge the prototype phase is a research and development process, Engineering officials were not able to physically observe the progress in building the NGDV prototypes. Such observations may have identified potential issues with the vehicles before the prototype testing phase began.

The U.S. Government Accountability Office has identified ten best practices associated with high-quality and reliable schedules for government acquisition programs. One such practice is a schedule risk assessment, which is an essential basis for managing a schedule, making progress, and identifying and resolving potential problems. The Postal Service conducted supplier risk assessments after the design review meetings to evaluate the vehicle design and program schedule risks, the suppliers’ progress in completing significant milestones, and any schedule risks in meeting Postal Service delivery dates. However, to prevent potential unequal/biased influence on vehicle design among suppliers, the Postal Service did not use the risk assessments to mitigate or resolve potential problems, technical challenges, integration risks, or other events that occur during the prototype design phase.

In addition, we noted that most commercial fleet acquisition strategies favor standardization or customization of commercial off-the-shelf vehicles rather than purpose-built vehicles. Customization of existing vehicles follows fleet management best practices found among foreign posts and Postal Service competitors. Developing a purpose-built vehicle for the operational needs of the Postal Service adds significant time and complexity to the overall acquisition timeline. However, the original acquisition and deployment schedule appeared to be developed heavily towards the use of an existing vehicle product that was close to production readiness.

Given the significant capital investment the NGDV program will require, the Postal Service’s projected liquidity, and the delays experienced in the NGDV prototype development phase, we believe a thorough assessment of the NGDV production timelines is warranted to determine the risk of further delays.

We recommended the Vice President, Delivery Operations, coordinate with the Acting Vice President, Engineering Systems, to perform a schedule risk assessment of the NGDV production timeline to evaluate the risk of further delays and determine whether modification to the mixed vehicle acquisition strategy is warranted.