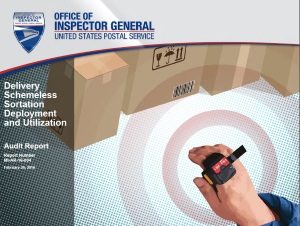 Background
The Delivery Schemeless Sortation (DSS) unit is a laptop computer with a Bluetooth headset combined with a ring scanner to capture package barcodes when packages arrive at delivery units. DSS provides both visual and audible indicators for routing information. This enables clerks without route training to sort packages. The U.S. Postal Service spent about $35 million to deploy about 13,000 DSS units during fiscal years 2013 and 2014.

The objective of this audit was to review and evaluate whether the Postal Service uses DSS equipment in accordance with program requirements and criteria.

What The OIG Found
DSS units are underused by the Postal Service. We identified 319 DSS units assigned to 203 sites with fewer than three routes and 3,489 DSS units not meeting the minimum of 540 weekly scans, which is below the national average scanning rate of 1,766. In the absence of established standards, Customer Service Operations and Technology Acquisition managers stated that a delivery unit should have at least three carrier routes to be a DSS site and a minimum of 90 scans a day or 540 scans a week as a reasonable estimate of usage.

Since introducing DSS, the Postal Service has added features such as manual letter routing and the use of multiple scanners and headsets with each laptop, but has not established criteria for using these upgrades, which enable processing more mail volume with fewer DSS units.

Because no initial or post-deployment criteria were established, DSS units are not deployed to ensure maximum use for schemeless sortation and mail tracking data to improve package visibility. Additionally, engineering program managers did not follow inventory controls to ensure accountability of DSS units and relied on connection to the network to physically track them.

Because it lacked a mandatory requirement to connect DSS units to the network, the Postal Service could not account for 885 units nationwide and cannot ensure custody of transferred equipment. We also issued a management alert on December 7, 2015, as part of this audit, to inform management of this issue and concerns about network security risks related to DSS units. In the alert we recommended that management complete a physical inventory of all DSS units and management agreed; therefore we will not be making a recommendation about this issue.

What the OIG Recommended
We recommended management establish national and site-specific use plans and goals for deployed DSS units to maximize system use with other scanning systems, mail volume, and upgrades.