Postal Service lessors include individuals and business entities, such as limited liability corporations, partnerships, trusts, and estates. The IRS allows the owners of these entities to use a Social Security number for tax reporting when they establish the entity; however, if the owner dies, these owners must instead use an employer identification number.

Our objective was to assess controls over updating lease information for deceased lessors.

What The OIG Found

The Postal Service did not always know which facility leases it had with deceased lessors and continued to pay some of them, and did not always maintain accurate lessor information in its facilities management system.

We identified 338 active lease agreements associated with the 321 deceased persons listed as lessors (some lessors had multiple leases with the Postal Service). We also identified two leases where the lessor died before the lease was signed and referred these instances to the OIG Office of Investigations.

Of the 338 active (and valid) lease agreements, the Postal Service made payments to:

■ Sixty-seven leases with annual rent totaling about $1.6 million were with legal entities that continued to use deceased individuals’ Social Security numbers when they should have used employer identification numbers. 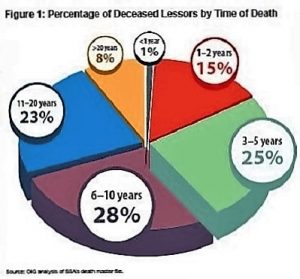 The Postal Service did not have a process to confirm that lessors’ information remained accurate during the term of the lease but relied on lessors’ estates to voluntarily provide notification of a death.

In addition, for 116 of the 338 leases with annual rent totaling about $2.1 million, the Postal Service was aware that the lessors were deceased and updated lease information to include the new lessors in its facilities management system; however, the system still identified deceased persons as active lessors. This occurred because Facilities personnel did not change all applicable fields in the system when they updated lease information.

Maintaining leases with deceased lessors jeopardizes the integrity of Postal Service’s financial and operational data and could damage its reputation and brand. In addition, there is a greater risk of fraud when payments are improperly made to deceased individuals.

What The OIG Recommended