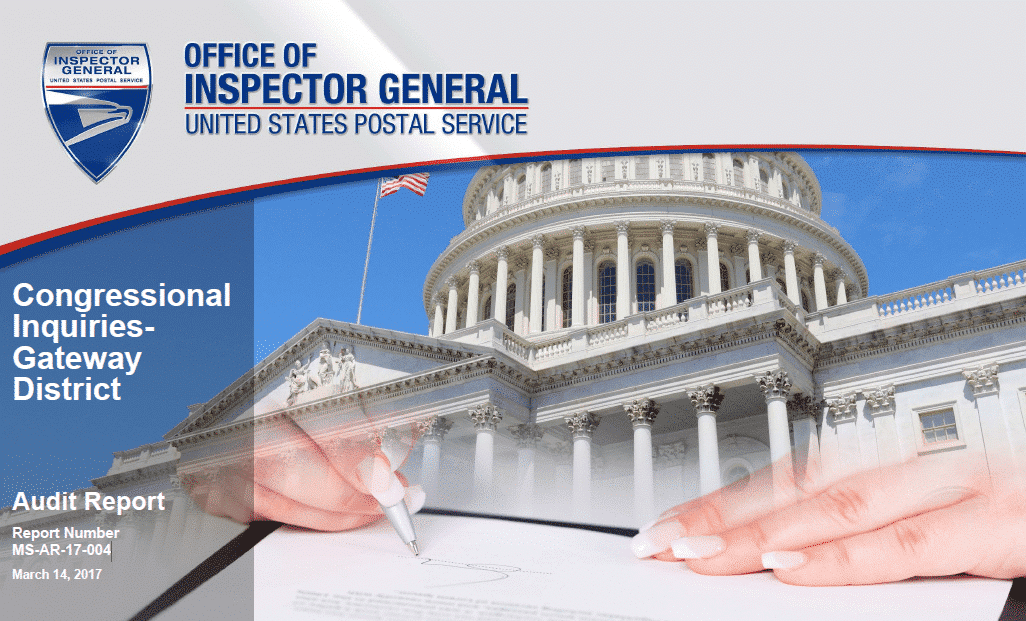 The U.S. Postal Service frequently receives inquiries from members of Congress and their staff. Congressional inquiries might include questions about service or changes in processing facility operations, or they might include complaints about mail delivery or decisions to change facilities.

Both groups coordinate with other field or headquarters staff (such as those within Facilities, Delivery, or Retail Operations) for assistance when needed.

Illinois Congressman Rodney Davis’ office raised concerns to our office about how inquiries from congressional officials were handled and coordinated between Postal Service Headquarters and local management, including those directly related to two leased post offices within his district:

The Gateway District effectively handled and coordinated the 61 formal congressional inquiries, responding in an average of 7 days. In addition, the district was generally responsive to informal inquiries regarding the Stonington Post Office, but did not adequately respond to several informal inquiries about the Waggoner Post Office due to a lack of information from headquarters’ Facilities staff.

Specifically, Facilities staff was unable to provide complete information to the district about the timeline or estimated opening of the Waggoner office in response to various inquiries from Representative Rodney Davis’ staff between 2015 and 2016. For example, in April and June of 2016, the district was asked about opening dates. It did not adequately respond, instead waiting for specific actions by Facilities staff members who were responsible for coordinating and enforcing repairs.

While Facilities staff continue to work with the landlord to complete needed repairs, as of February 2017 the Post Office remains in emergency suspension without a timeline or estimated opening date.

Facilities staff attributed the lack of information to staffing shortages and complexities in working with the landlord. We recognize these challenges; but, a lack of timely and complete information impeded the district’s ability to be responsive and also negatively impacted the Postal Service’s brand, image, and interaction with customers.