December 21, 2015
Something happened in fiscal year 2015 that hasn’t happened in years. Commercial First-Class Mail volumes increased a tiny bit. And we do mean tiny. The 9,700-piece increase in First-Class Presort Cards and Letters doesn’t even register as a percentage point increase over last year. Still, this movement is enough to get people wondering: Is it a blip or the end of the freefall for First-Class Mail?

While single-piece First-Class Mail has been in decline since about 1990, commercial First-Class Mail – what businesses mailers send – remained a growth product until 2008 when it fell by 1.6 percent. It has declined every year since then until this year (see chart below). It’s no coincidence that 2008 was the turning point for commercial mail volumes. That year marked the first full year of the Great Recession, which roughed up the housing and financial sectors in particular. With limited cash flow, those sectors – heavy users of First-Class Mail for advertising – cut back on marketing, including direct mail.

Standard Mail volumes also dropped during the recession, but they experienced a small uptick in 2013 and have flattened since then. Could Standard Mail be poised to begin a pre-recession climb? Digital enhancements to mailpieces combined with incentive programs, such as the Postal Service’s recently approved Promotions Program for 2016, could provide a boost to a Standard Mail rally. Certainly, Standard Mail will benefit from the 2016 elections as politicians and political action groups use direct mail for messaging.

Where do you see mail headed in 2016? Is the uptick in First-Class business mail a sign of good things to come? Or was it too small to indicate anything? Do you expect digital enhancements to mailpieces to increase marketers’ use of Standard Mail in 2016 and beyond? 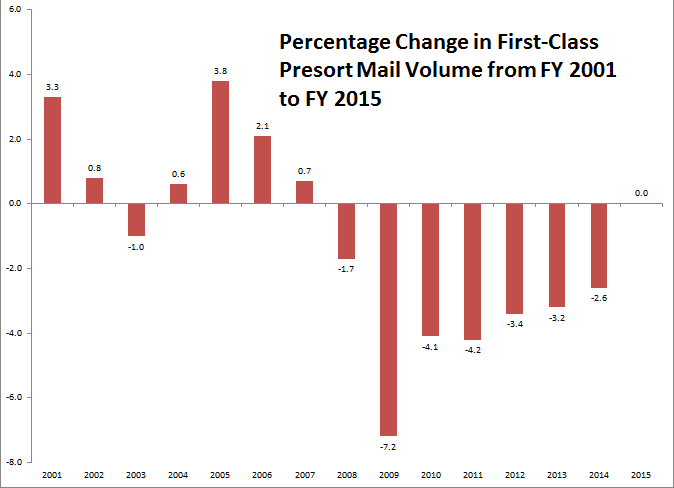