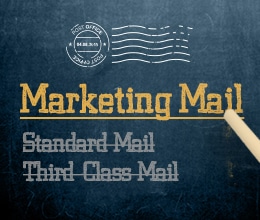 At one time, it was called Third-Class Mail. Today, it’s known as Standard Mail. In 2017, it will be called (USPS) Marketing Mail. The U.S. Postal Service has proposed a name change for Standard Mail to better signal to customers that this mail is used primarily to market a product or service.

This rebranding to Marketing Mail is part of the recent rate filing the USPS made with the Postal Regulatory Commission to change prices, including a 2-cent increase in the price of a stamp, returning it to 49 cents. If you remember, back in April, the Postal Service rolled back the stamp price to 47 cents. Those rollbacks end on January 22, 2017, when the new rates are slated to take effect.

Some might remember that a few years ago, the Postal Service changed the name of one of its oldest products, Parcel Post, to Standard Post. Now that Standard Mail is getting a new name, what happens to Standard Post? Well, Standard Post will become USPS Retail Ground, as spelled out in a separate rate filing – this one for price changes to competitive products, such as Priority Mail and Parcel Select. Those prices are also scheduled to take effect on January 22, 2017.

By law, the Postal Service can raise prices annually on its market-dominant products – such as First-Class Mail, Periodicals, and Standard Mail – as long as the price increase for each class of mail does not exceed an inflation-based cap. This year, the cap is about 1 percent. So, while the stamp price in First-Class Mail will go up 2 cents, other products in that class, such as the international stamp and Postcards, will stay the same ($1.15 and 34 cents respectively) to keep the overall class within the 1 percent cap.

On its competitive products, the Postal Service is not constrained by the price cap and can raise prices as much as the market will bear. In this case, the USPS seeks to raise prices on Shipping Services almost 4 percent on average, roughly equivalent to the increases that UPS and FedEx have announced for 2017.

What do you think of changing the name of Standard Mail to Marketing Mail? Do you think it will help customers better understand what this product is and how it can be used as part of their marketing strategies? Are there other products that might benefit from a name change to better signal their purposes?