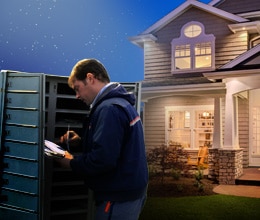 Who doesn’t like finding a package they ordered online on their doorstep at an unexpected time, like, say, late in the evening just before you turn out the porch light for the night?

Consumers have come to expect quick delivery of parcels, often at odd hours of the day. This new paradigm comes at a cost, however. For the U.S. Postal Service, it means their city carriers and non-career city carrier assistants (CCAs) are delivering packages after the targeted return time of 6:00 p.m. Returning late from their routes raises safety concerns — especially when it gets dark earlier — and overtime costs.

Few are complaining about the ecommerce explosion, mind you. It’s driving a growth in parcels — even as lettermail volumes decline. This package boom, along with a downsizing of the Postal Service workforce and evolving customer needs, have led to changes in the network and delivery. Furthermore, a wide range of variables, such as weather, employee absences, or new carriers to a route, can affect delivery on a daily basis.

All of this poses challenges for the Postal Service in meeting its goal of 95 percent of letter carriers being off the street by 5 p.m. and 100 percent by 6 p.m. Our recent audit of the Bay Valley (CA) District — in the heart of the nation’s ecommerce hub — found that carriers and CCAs fell short of the 100 percent goal by 6 p.m. In calendar year 2016, only 75 percent of carriers returned to the office by 6 p.m., our report said.

Bay Valley certainly is seeing the effects of ecommerce activity, as well as Sunday package delivery, and grocery delivery service: The district had a 16 percent growth in package volume in calendar year 2016 over the previous year, topping 101 million packages. In some areas, package deliveries now regularly occur early in the morning and as late as 10 p.m.

We found a mix of underlying reasons for missing the targeted return time: Insufficient staffing, late or improper mail arrival, inaccurate route adjustments, and insufficient supervision. The Postal Service agreed with our recommendations to improve the underlying conditions.

We welcome your suggestions as well. What more could be done to get carriers off the streets on time? Given all the variables that can affect the ability to complete deliveries by the targeted time, what additional precautions could be taken to enhance carrier safety?