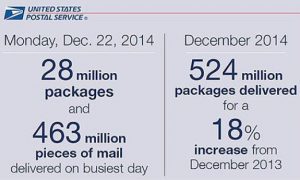 (December 6, 2014) The Postal Service exceeded its projections during the holiday season, delivering approximately 524 million packages in December — an 18 percent increase over the previous year.

On Dec. 22 alone, USPS delivered more than 28 million packages, the most packages delivered in a single day in the organization’s history. Approximately 463 million mailpieces also were delivered that day.

The Postal Service prepared for the higher demand by improving tracking and reliability for customers. USPS also delivered packages seven days a week during the season.

“The dedication and resolve of our employees is commendable,” the PMG said.

“They adapted and delivered heavier-than-ever volumes of packages. They worked extremely hard, many of them braving harsh weather. I’m honored by the commitment they demonstrated this holiday season.”

Holiday volumes are expected to continue this month as consumers and businesses
return unwanted gifts and merchandise through USPS.