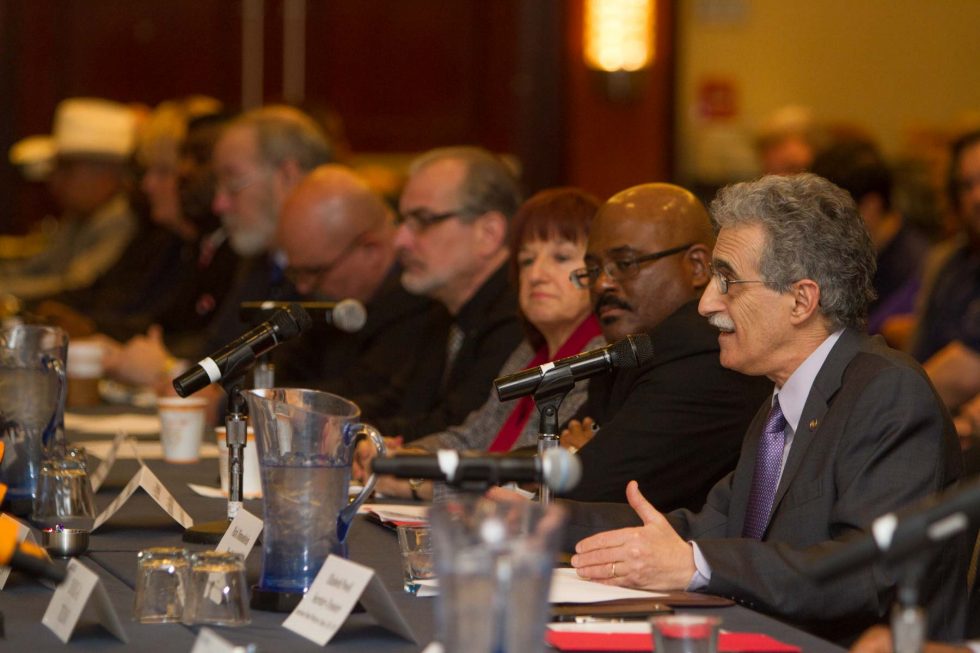 At the bargaining table – February 2015

By Joe Davidson – May 28, 2015
The U.S. Postal Service (USPS) is proud of its pledge to deliver mail through all kinds of tough stuff. But it looks like one of its hardest jobs is getting through contract talks.

Negotiations with one of its largest labor organizations, the American Postal Workers Union (APWU), stalled on Wednesday.
Fortunately, stalled is not the same as stopped.

APWU said both sides will begin mediation in an attempt to reach agreement. Until then, “all the protections of the 2010 Collective Bargaining Agreement will continue in full force and effect until a new contract is reached,” said APWU President Mark Dimondstein.

Services to the public also will continue.

“No postal services are threatened — absolutely not,” said Douglas A. Tulino, USPS labor relations vice president. “United States Postal employees are extremely dedicated and understand we have mechanisms in place, including mediation and interest arbitration, to resolve our differences.”

But APWU members, dedicated though they may be, don’t understand the agency’s negotiating position. Dimondstein called “management’s economic demands and proposed changes to the workforce structure … completely unacceptable.”

Those demands include eliminating current cost-of-living adjustments, increasing employees’ contributions to health-care coverage, instituting lower pay for future career employees who would get reduced benefits, increasing the percentage of non-career employees and weakening protections against layoffs, according to APWU.

Not surprisingly, USPS has a different view.

“The APWU’s assessment of our economic proposal is inaccurate,” Tulino said. “Our objective is to build a workforce that enables the Postal Service to compete and thrive well into the future.”

He would not explain what the USPS economic proposal is, but did say both sides are working “diligently and professionally in an attempt to reach agreement.”

All this might sound strange to other federal workers, most of whom are not represented by unions with the same bargaining power as those for postal workers. Unlike other agencies, the Postal Service gets its operating funds from the products and services it sells, not tax revenue.

“We did make significant progress in our discussions with the Postal Service over the past few months,” said NRLCA President Jeanette Dwyer. “Unfortunately, the parties were unable to agree on the core financial issues that are critical to reaching an overall agreement.”

Meanwhile, APWU has engaged in a high-profile effort to draw public support.

Two weeks ago it rallied with actor and activist Danny Glover, the son of postal workers, outside the Post Office on 14th Street, NW, between K and L streets, in Washington. That was one of scores of APWU rallies around the country on the same day.