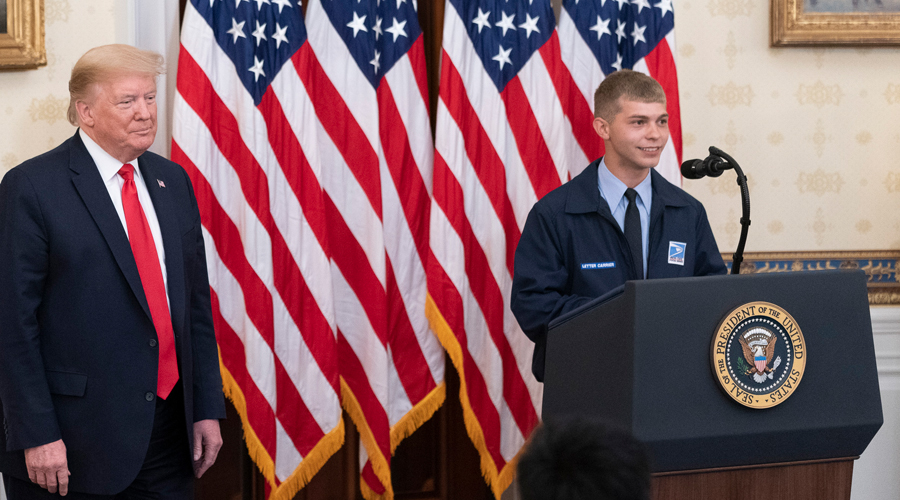 How many journeys to the White House start with a roll of toilet paper?

That’s exactly what led Cincinnati Letter Carrier Kyle West — now known to millions as “Mailman Kyle” — to the Blue Room on May 1 to receive praise from President Donald Trump during a recognition ceremony dubbed “Hard Work, Heroism and Hope.”

West was one of several people invited to the nation’s capital to highlight their charitable responses to the coronavirus pandemic.

In the case of the 23-year-old letter carrier, he had been moved by a customer’s plea for help in March.

The homebound man, who has dementia, desperately needed toilet paper.

West gladly gave him a roll, and he soon decided to reach out to 400 of the most vulnerable customers on his route — namely older folks trying to avoid coronavirus exposure, and those with lower incomes who are struggling financially as the pandemic takes an economic toll.

He distributed a note with his phone number: “If you are at risk and need help getting essential items, let me know. I will do what I can to help. Sincerely, Mailman Kyle.”

West heard from around 50 customers with urgent needs, as well as countless others thanking him and offering to donate necessities — such as toilet paper, milk, paper towels and soap — that he distributes while delivering mail.

“It’s a lot to deal with, but it’s not a hassle,” West said. “I love these people and they love me. I like helping them.”

Angelena Fondenberger, West’s supervisor at Cincinnati’s Groesbeck Branch, said he “brought a lot of his route and the community together.”

Then came word that West was wanted at the White House.

A whirlwind trip ensued, including his first plane ride. He points out that his responsibilities as a hard-working dad with a 5-year-old son have long kept him close to home, although he enjoyed Washington and hopes to return someday.

In the Blue Room ceremony, Trump had affirming words for West before asking him to speak: “Kyle, your love for your neighbors lifts us and the entire nation.”

“Thank you, Mr. President,” West responded. “I’m greatly honored to be here to represent my fellow postal employees as we continue to provide our essential services to America.”


He touched on customers’ displays of gratitude, the critical items they count on receiving by mail and the organization’s commitment to safety during the pandemic, before concluding: “I’m very proud to work for the Postal Service and to deliver for our country.”

Back on the job in Cincinnati, West recalls his White House experience fondly, even if it was a bit nerve-racking, and he hopes the actions that got him there will inspire others in these worrisome pandemic times.

“If anyone’s at risk, step up,” he said. “Let’s treat each other like family and get through this, so we can get our normal lives back. We all want this to be over.”