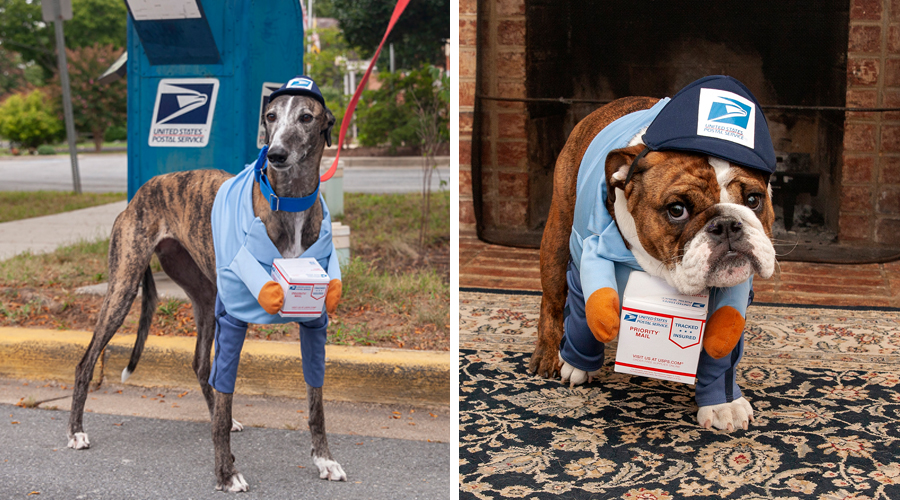 The officially licensed USPS dog costume has sold more than 10,000 units since January through the online Postal Store alone.

It’s Halloween time, Americans are rallying around the Postal Service, people love their pets, and who couldn’t use a good chuckle right about now?

Count those among the reasons you’re quite likely to see dogs dressed as letter carriers in your neighborhood and social media feed these days.

The officially licensed USPS dog costume, introduced two years ago, has become nothing less than a blockbuster — selling more than 10,000 units since January on the Postal Store alone, and proving popular with retailers such as Amazon, Chewy, Target and more.

It’s only the second official costume in USPS history, following in the footsteps of the U.S. Mail carrier kids costume that’s been available for years.

“Dog costume customers smile and giggle, and they learn something, too,” said Stamp Products and Exhibitions Manager Amity Kirby, pointing out that USPS requires the licensee, California Costumes, to include information on the packaging to educate consumers about keeping postal employees safe around pets.

The costumes for dogs and kids are among an ever-growing portfolio of USPS licensed products that create royalty revenue for the organization without the expense of manufacturing and marketing.

Categories include apparel, accessories, gift and novelty items, toys, stationery and — with an eye toward the Postal Service’s 250th anniversary in 2025 — publishing.

“This is a great opportunity to engage with a new customer,” Kirby explains. “We’re aiming to capture the attention of a new generation of potential USPS customers while allowing existing customers to engage with USPS in nontraditional ways.”

“It’s doggone cute,” she said, and the beauty of it?