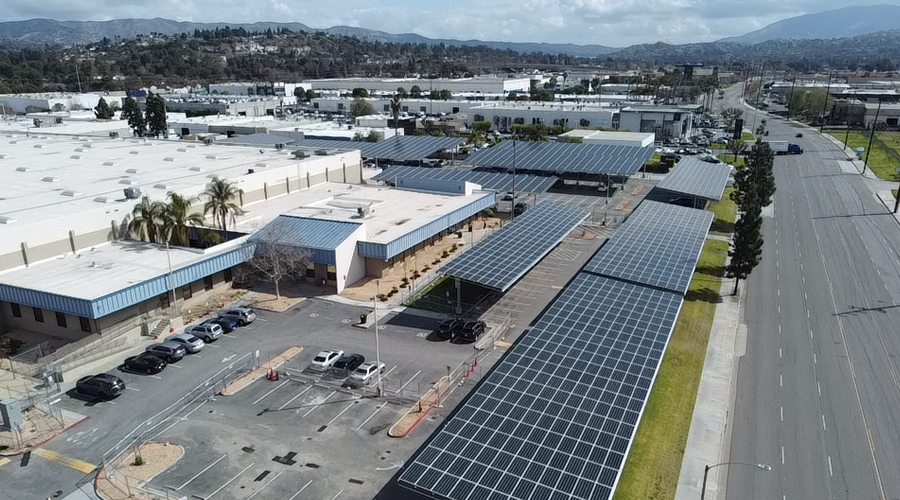 The Anaheim, CA, Processing and Distribution Center now has solar panels in its parking area.

Employees at the Anaheim, CA, Processing and Distribution Center were thrilled last year when USPS chose the facility for solar panel installation.

“How did we get so lucky?” Maintenance Manager Frank Garcia remembers thinking. One asset in the site’s favor, he later found out, was the facility’s new roof.

The panels’ weight was deemed too much for that new roof to bear. The very feature that helped Anaheim win the installation put it in jeopardy.

The project was nearly abandoned until engineers came up with a creative solution: They would limit its scope and install the panels in the parking area.

“We are very proud of the Anaheim solar panel project,” Chief Logistics and Processing Operations Officer Isaac Cronkhite said. “Successful projects like this demonstrate our organization’s dedication to energy reduction while paving the way to a sustainable future.”

Plan B was an elegant alternative, but some fancy logistical footwork was required.

Parking would be disrupted, and the project, which began in September, would need to be divided into two phases to break for peak season surge.

“We were running some incredible numbers,” Garcia recalled. “In addition, there was a lot of coordination required between contractors, inspectors and the city of Anaheim.”

But soldiering through that chaos will pay environmental and financial dividends now and in the future.

The panels will not only power the facility, they will feed energy back into the city of Anaheim’s electrical grid, which in turn puts some money into the Postal Service kitty.

The system went to full capacity on June 8, and the billing cycle is such that it’s still too early to know exactly what those financial dividends may be, but one thing is clear: Some workers are already enjoying the shaded parking.

“It does make a big difference,” Garcia said.