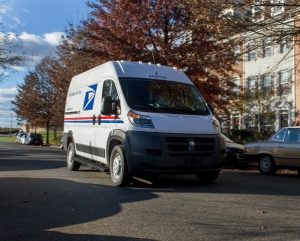 FCA has started delivering another 3,339 Ram ProMaster cargo vans to the U.S. Postal Service in a second order that follows a 9,113-vehicle order last year.

USPS awarded the contract to FCA on March 24, and the vehicles will be delivered by the end of November, said Ralph Kisiel, an FCA spokesman. In all, FCA will deliver 12,472 vans, mostly from the 2016 model year and some from the 2017 model year.

The postal service has been adding ProMaster vans set up with a Ranger Design rack system to replacing aging vehicles as it continues its development of a next-generation delivery vehicle to replace its Long Life Vehicles.

USPS is purchasing ProMaster 2500 vans powered by a gasoline 3.6L Pentastar V-6 engine that produces 280 hp and 260 lb.-ft. of torque. The front-wheel drive van is available in more than 14 configurations.