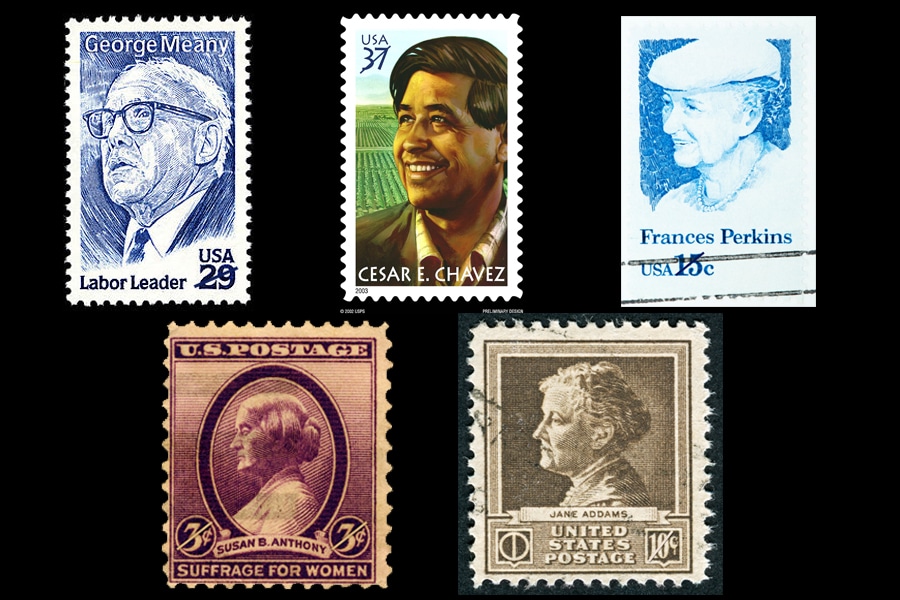 In honor of next week’s Labor Day observance, “The list” looks at seven American workers’ rights advocates who were honored with stamps.

1. Susan B. Anthony. Honored in 1936 with a 3-cent stamp and in 1958 with a 50-cent stamp, the famed women’s rights advocate pushed for eight-hour workdays and equal pay for equal work.

2. Jane Addams. Celebrated on a 10-cent stamp in 1940, this pioneering social worker and child labor activist was the first American woman awarded the Nobel Peace Prize.

3. Dr. Alice Hamilton. In 1995, this social reformer appeared on a 55-cent stamp for work that contributed to the abolishment of child labor and the passage of early workmen’s compensation laws.

4. Frances Perkins. President Franklin Roosevelt’s secretary of labor — the first female cabinet member — was commemorated on a 15-cent stamp in 1980 for her dedication to improving working conditions for all Americans.

5. George Meany. The first president of the American Federation of Labor and Congress of Industrial Organizations (AFL-CIO) was remembered on a 29-cent stamp in 1994.

6. A. Philip Randolph. Released in 1989, a 25-cent stamp recognized the civil rights and labor leader who founded the first successful black trade union, the Brotherhood of Sleeping Car Porters.

7. Cesar E. Chavez. The iconic social activist and founder of the National Farm Workers Association, later called United Farm Workers, was celebrated in 2003 with a 37-cent stamp for his efforts to provide fair wages, benefits and humane living conditions for farm workers.

The National Postal Museum’s philately site has more information about these stamps and many others. Got ideas for future editions of “The list”? Email them to uspslink@usps.gov.