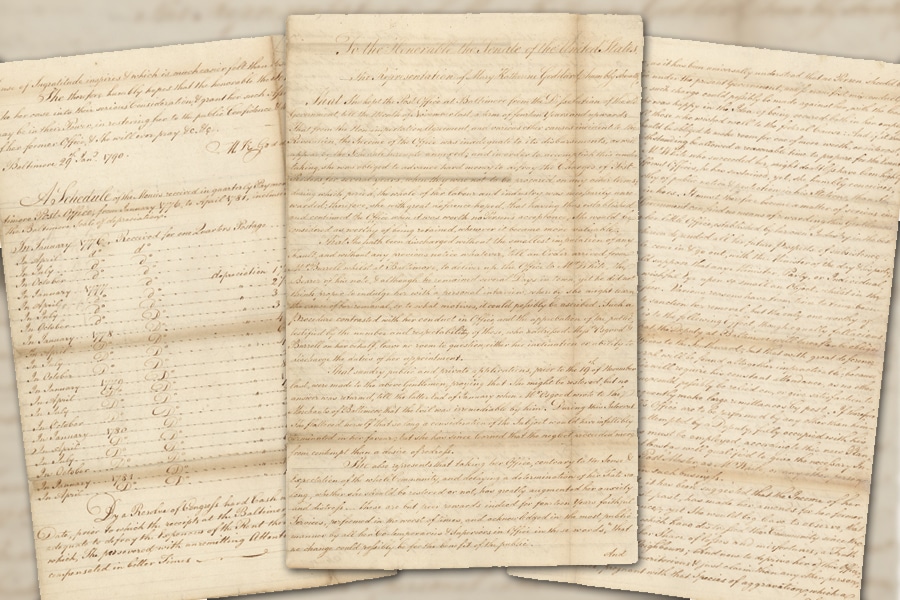 This petition to reinstate Mary Katherine Goddard as Postmaster Baltimore is part of the National Archives in Washington, DC.

To help mark Women’s History Month, here are five facts about Mary Katherine Goddard, the first known woman Postmaster in the United Colonies, the predecessor of the United States.

1. Goddard came from a postal family. She was born in 1738 in New London, CT, where her father, Giles, served as a physician and Postmaster. Her brother, William, was a well-known printer and newspaper publisher who later established a colonial postal system independent of its British counterpart.

2. Her postal career began in Maryland. In 1774, Goddard joined William in Baltimore, where she managed the family print shop while he was drumming up support for the postal system. She was serving as Baltimore’s Postmaster by July 1775, when Benjamin Franklin was named the first American Postmaster General.

3. She also was one of America’s first women publishers. Not only was Goddard in charge of a Post Office serving a major commercial city, she also was accomplished in other areas. She ran a bookstore, and from 1774-1783, she published The Maryland Journal and Baltimore Advertiser.

4. Her name is part of the Declaration of Independence. In 1777, Congress tasked Goddard with printing and distributing the first copies of the declaration with all signatures — a job she completed in two weeks. Although she used the gender-neutral “M.K. Goddard” as her name when she ran the newspaper, her copy of the declaration lists her full name at the bottom.

5. Goddard’s dismissal caused an uproar. In 1789, newly appointed Postmaster General Samuel Osgood replaced Goddard with his own pick for Postmaster — a common practice at the time. More than 200 people petitioned Osgood to reinstate Goddard but he refused, claiming the right to exercise his own judgment. Goddard wrote to both President George Washington and the U.S. Senate to petition for reinstatement, but they declined to intervene. She ran a bookshop in Baltimore until a few years before her death in 1816.