By Joel Eisenbaum – December 27, 2017
HOUSTON – Some United States Postal Service employees in the Houston area, saddled with 14-hour days and seven-day workweeks over the last month because of the holidays, have been underpaid thousands of dollars, Channel 2 Investigates has learned.

He asked not to be named, because he feared retribution.

The problem appears to be confined to rural route mail carriers in north Harris County, covering Tomball, parts of The Woodlands and many places in between.

“Every time we ask, they say, ‘We don’t know, there was a glitch in the system.”

But Channel 2 Investigates learned the glitch was actually traced to human error by a supervisor at the Post Office in Tomball at 122 N. Holderrieth Blvd.

That supervisor has since been transferred, Channel 2 Investigates has learned.

In at least 16 cases, rural letter carriers were not issued a paycheck at all, according to a separate source with knowledge of the problem.

Letter carriers were given the option to draw on a future paycheck to make up for the error, but many opted out.

To protect the privacy of our employees, the U.S. Postal Service does not publicly discuss personnel matters. As soon as we become aware of employees concerns of any type, we take immediate steps to research and make appropriate corrections including in this specific case. 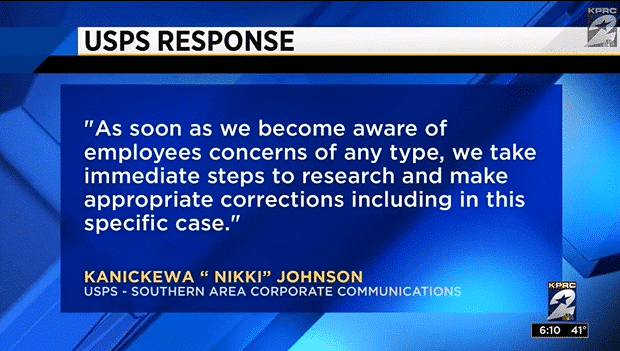