Amazon, the world’s largest online retailer is today celebrating its 20th birthday, by highlighting its commercial success story. For many Amazon employees, the reality is quite different. The real story behind the vast profits is a company that is consistently breaching the fundamental rights of its staff. Many of these workers, together with Ver.di, the German United Services Union, and UNI Global Union, are calling on customers and citizens to send birthday greetings to Amazon, protesting against poor working conditions. Amazon are calling today “Prime Day”, but it should be “Shame Day”.

Ver.di National Executive member Stefanie Nutzenberger said, “Amazon has made a name for itself as an organisation that is aggressively anti-union. In Germany, workers are organising themselves with a lot of courage and determination in order to assert their rights and to demand a collective agreement that guarantees them a living wage and decent working conditions. Today we call on all customer and citizens to show solidarity with Amazon workers”.

UNI Global Union General Secretary Philip Jennings said, “I recall the words of Amazon CEO Jeff Bezos when he said “You win a reputation by doing the hard things well”, to my mind they are winning a reputation by doing the wrong things well – meaning poor working conditions and poor wages, denying the rights of German workers to have union representation and collective bargaining rights. My message to Mr Bezos is, your company is twenty years old and that is old enough to know better. It is time for a new deal at Amazon where the rights and dignity of working people are recognized and respected.”

Amazon has been in business for 20 years, an impressive record marked by the violation of trade union and workers’ rights, precarious jobs, the use of invasive monitoring techniques, constant pressure, and a domineering attitude towards authors, publishers and small online retailers. It has also become a master in the use of tax-dodging tricks which has deprived communities for many years of tax income that runs into the billions.

Today, Amazon workers in Germany will be turning up for work wearing T-Shirts bearing the slogan Yes to a Collective Agreement at Amazon and they will cease work for one minute. Amazon workers in Germany have been demanding a collective agreement since 2013. They have also gone on strikes several times. Amazon has categorically refused to negotiate.

Customers and citizens around the world can show their solidarity by joining in the demand for a collective agreement in Germany. More information can be found at www.amazon-verdi.de.

Join in on Twitter using the hashtags #PrimeDay and  #ShameDay 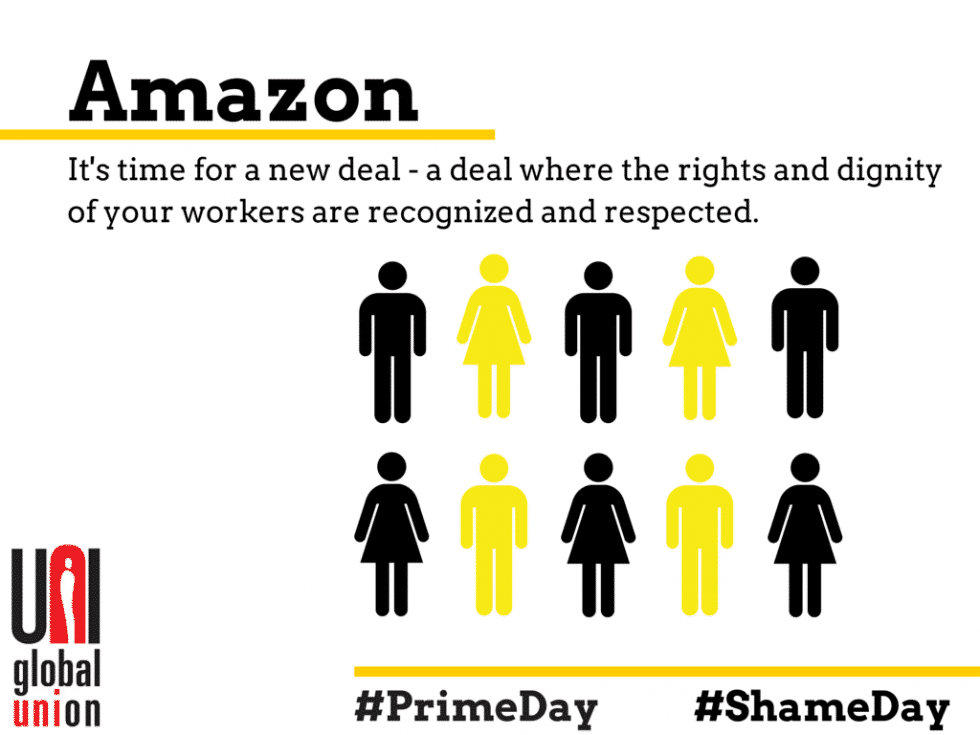