With that in mind, the service, which has been in the news in recent months for its plans to close its Kalamazoo Postal Processing Plant on 9th Street in Oshtemo Township, will host an informational job fair on March 4.

Sabrina Todd, communications spokeswoman for the USPS Greater Michigan District, said that while most of the mail sorting and processing work the center now performs is to be transferred to facilities in Grand Rapids, there are still jobs that will need to be filled in the future in this area.

The positions that will be the focus of the job fair, and their estimated hourly pay rate, include:

The 9th Street mail center is still slated to be closed on April 18. It processes mail that originates throughout Southwest Michigan; all mailings that originate in zip codes that begin with “490” and “491.”

After its work is transferred on or before April 18, part of it will be used as a hub for trucks transporting mail from the Kalamazoo area to Grand Rapids for processing. 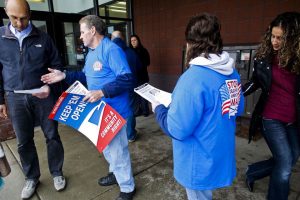 Members of the American Postal Workers Union-Local 143 and the National Mail Handlers Postal Union have protested the consolidation of the postal service’s work, saying it will mean a slow-down in mail delivery since mail being sent and received in the Kalamazoo area must now go to Grand Rapids for processing before coming back to Kalamazoo.

They said it will also mean 100 to 120 postal workers in Oshtemo Township will have to find jobs elsewhere. Todd said bargaining teams for the unions and USPS management were looking to make sure those workers had places to go, and she said it is likely they would have the opportunity to apply for any of the jobs discussed at the job fair as well as positions that open as others retire or leave the service.

Why have a job fair in a place that is slated to lose jobs?

“This is just an informational job fair to speak about potential job positions at surrounding postal offices in the area and that was just the most viable place to hold it,” Todd said.

She said interested people may check usps.com/careers to see what openings my be available in the area.

Those interested in applying for carrier positions mentioned above are required to have a valid state driver’s license, a safe driving record, no driving suspensions, no DUIs and at least two years (without a break) of documented driving experience.

Applicants for all positions must successfully pass a pre-employment drug screening. They must also be a U.S. citizen, a lawful permanent resident alien, or a citizen of a territory owing allegiance to the United States.