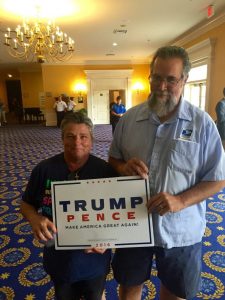 Vice Presidential candidate Mike Pence made the case for Donald Trump to a largely working class, veteran population in the Virginia shipbuilding community of Norfolk on Thursday. The crowd showed real enthusiasm, even after a turbulent week for the campaign which saw a cratering of poll numbers.

The audience cheering Pence was not made up of your standard conservative demographics. Many shirts with local Union decals and a fair amount of young people made up the crowd. Enter Cheryl and Rick in their US Postal Service shirts. They represent an anomaly that has been seen in force in 2016: Lifelong Union Democrats who are voting for Trump.

I asked them a simple question:

What has animated you to leave the party that has been your home for decades, to vote Trump?

Here are their answers, in full:

RICK: My Union is lock stock and barrel Democrat.

CHERYL: I worked for the Clintons in Virginia to elect Bill Clinton. I was invited to the inauguration. We got a Christmas card every year from the Clintons.

RICK: We liked Hillary in 2008. We liked her over Obama. I went out and bought Hillary for President t-shirts.

CHERYL: But we’re fed up. We’ve worked our whole life. Last year we lost our healthcare. We learned that our insurance of 27 years is no longer available because of Obamacare. So we had to get on a different plan. We had three months to choose a more expensive plan with more expensive deductibles. And we are now counted as the “newly insured” just because we have a new plan. But we had insurance already. They are playing the numbers and it’s our health at stake.

CHERYL: Yes. I remember in 2008 when Obama said: “You can’t listen to Hillary. She will say anything to get elected?” And now all of the sudden, eight years later, she is the “most qualified for the job?” It’s the email scandal too, where I think she was dishonest, and also the Clinton Foundation.

RICK: 30 years in the union and 9 years in the Navy. How can these Democrats possibly vote for Hillary and Obama. The union wants us to vote Democrat but we have our choice.

CHERYL: I turned against her years ago when those women came out against Bill Clinton. Hillary humiliated them, degraded them and destroyed them. They say Republicans have a ‘War on Women?’ What about Hillary’s real war on women?

RICK: She is very arrogant.

CHERYL: All lives matter, not just black lives. Look at the shootings that happened last week alone? Police Officers are being targeted.

RICK: I served. I would not trust her to be commander-in-chief. Not after Benghazi. When she turned her back on those soldiers.

CHERYL: Nobody is better off than they were 8 years ago. The middle class has shrunk.

RICK: We worked all our lives, we are worried about what we leave to our grandchildren.

CHERYL: Everything they promised we did not get. My nephew is a Navy SEAL. Obama promised to end the wars in 18 months. Did not happen. Promised healthcare prices would decrease. It did not happen. We used to vote for ‘Hope’ and ‘Change.’ Now all we can do is hope for change.