By Bill McAllister – April 22, 2016
It’s been a rough start for the nation’s 74th postmaster general.  Since taking office in February 2015, Megan J. Brennan has endured setback after setback in her attempts to right the troubled United States Postal Service.

Both Congress and the federal courts have rejected her repeated pleas to preserve the 49¢ first-class stamp.  That created what the USPS described as a “forced” in stamp prices on April 10. The decision is expected to cost the USPS about $2 billion a year.

Brennan urged the Postal Regulatory Commission to put some limits on its rate-making rules, but the commission rejected her request as premature.

The Senate Homeland Security and Governmental Affairs Committee held a hearing for the latest candidate for the Postal Service’s Board of Governors.

Yes, that is the panel of nine presidential appointees who are charged with overseeing the USPS.

And, yes, that is the panel that has been reduced to one member thanks to objections primarily raised by Sen. Bernie Sanders of Vermont.

But with questions being raised about the viability of Sanders’ presidential campaign, the Homeland Security Committee moved quickly to act on President Obama’s latest nominee for the postal board. 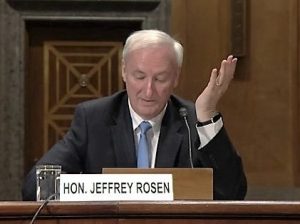 The nomination of Jeffrey A. Rosen of Virginia, a former Bush administration budget and transportation official, was announced by the White House March 17. A month later he got a hearing, something of a speed record for a postal issue.

Whether Rosen can get past the holds that Sanders has placed on Obama’s other postal board nominations remains to be seen.

For the moment, however, the hearing was a sign that Congress still hopes to give the Postal Service a workable oversight board.

“There is no escaping that the U.S. Postal Service is confronting very substantial challenges, both near-term and longer term,” Rosen told his Senate hearing.

If confirmed, Rosen said he could delve into the Postal Service’s problems “unbiased by personal participation in particular debates” about past postal issues.

Sen. Tom Carper, D-Del., who has been pushing for legislation to help the USPS for several years, welcomed Rosen’s nomination, saying he is facing “a tough assignment, if he’s confirmed.”

“I believe we have an opportunity here to inject some badly needed talent into the Postal Service at a time when the agency … is in grave need of independent oversight and direction,” Carper said in his prepared remarks.

Without naming Sanders, Carper said the failure of the Senate to fill the empty seats on the Board of Governors “is worse than unacceptable. I believe it’s shameful.”

No public corporation would be allowed by its stockholders to run without a board of directors overseeing the firm’s operations, he said.

“Congress needs to do its job and protect postal customers, as well as the investments of American taxpayers, by filling these positions,” Carper said.