Big businesses seem to benefit from indirect subsidies from the United States Postal Service in the form of rates that do not cover basic costs given USPS lost $5.6 billion in 2016. 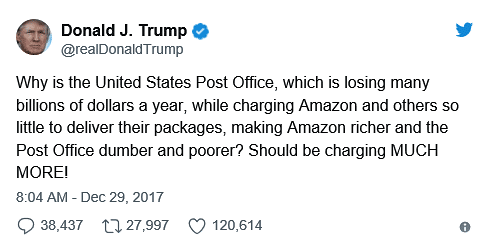 In Trump’s own words “Why is the United States Post Office, which is losing billions of dollars a year, while charging Amazon and others so little to deliver their packages, making Amazon richer and the Post Office dumber and poorer? Should be charging MUCH MORE!”

Amazon stock promptly slid 1.4 percent underscoring what is at stake.

To further muddy the waters, other research shows the lower prices USPS charges is keeping downward pressure on Federal Express and United Parcel Service pricing that also works to the advantage of Amazon.

Meanwhile Amazon is using money they save from artificially depressed shipping prices that are that way because of Postal Service charges to cobble together its own parcel movement business. That’s why Amazon has its own cargo jets flying in and out of Stockton Metro Airport and has opened up smaller “last mile” distribution centers such as the one on Louise Avenue in Manteca for its Prime customers. Granted the Prime Service is relatively limited in terms of what you can order and have delivered but it is getting in place in more and more areas of the country. Amazon will be able to peel away the more profitable business — read that deliveries in densely populated urban areas — leaving the Postal Service holding the bag.

The Amazon strategy is no long-term friend of the Postal Service that it is viewing more and more of a competitor for dollars in regard to urban deliveries while leaving USPS to handle more costly rural delivery of Amazon wares thanks to the federal mandate that basically is dictating universal mail delivery service.

Also working to the detriment of the Postal Service are two other things: The Congressional mandate they pre-pay retirement health benefits for all employees and the fact rate hikes are capped by annual inflation.

Given Amazon’s maneuvers to put as much as its own distribution system in place, should the Postal Service be able to charge closer to its true cost smaller firms using the Internet to ship goods and then harness UPS, Fed-Ex, or the post office to deliver merchandise the other Internet retailers would be at a distinct disadvantage to Amazon.

Complicating matters is how the government is making things such as free smartphones available for those who can’t afford them as well as subsidized internet service that are providing the means to further erode the value of the monopoly the Post Office holds on door delivery of first class mail. Eventually the need for the mail service will become marginal at best.

And there is no political will to rethink retirement health benefits for Postal workers or even to change how they appear on the balance sheet.

So what’s the solution?

One way is to cut the Postal Service loose while they still gave a chance to make it in the changing world of commerce, shipping, and communication.

Let them come up with ways to harness the massive network of offices and such they have in place. Let them negotiate real costs with employees with the understanding they’ve got to make it work or everyone will end up with nothing.

Another is to bite the bullet and restructure retirement health benefits, allow shipping charges to rise based on costs and the market and not on an artificial cap placed on them by politicians who want it both ways — universal service and low rates.

In a way Jeff Bezos is not the culprit. He simply was smart enough to figure a way to make the situation work to his advantage. Raising the rates now will hurt Amazon a bit but not as much as others.

Congress over the years has put the Post Office in the bizarre position of being a “free standing” government agency that has to make it on its own and then turns around and hamstrings them with mandates that make it impossible for them to stand on their own two feet.

It’s time to turn the Postal Service loose and allow it to shed the snail mail moniker forced on it in a large part by political decisions.