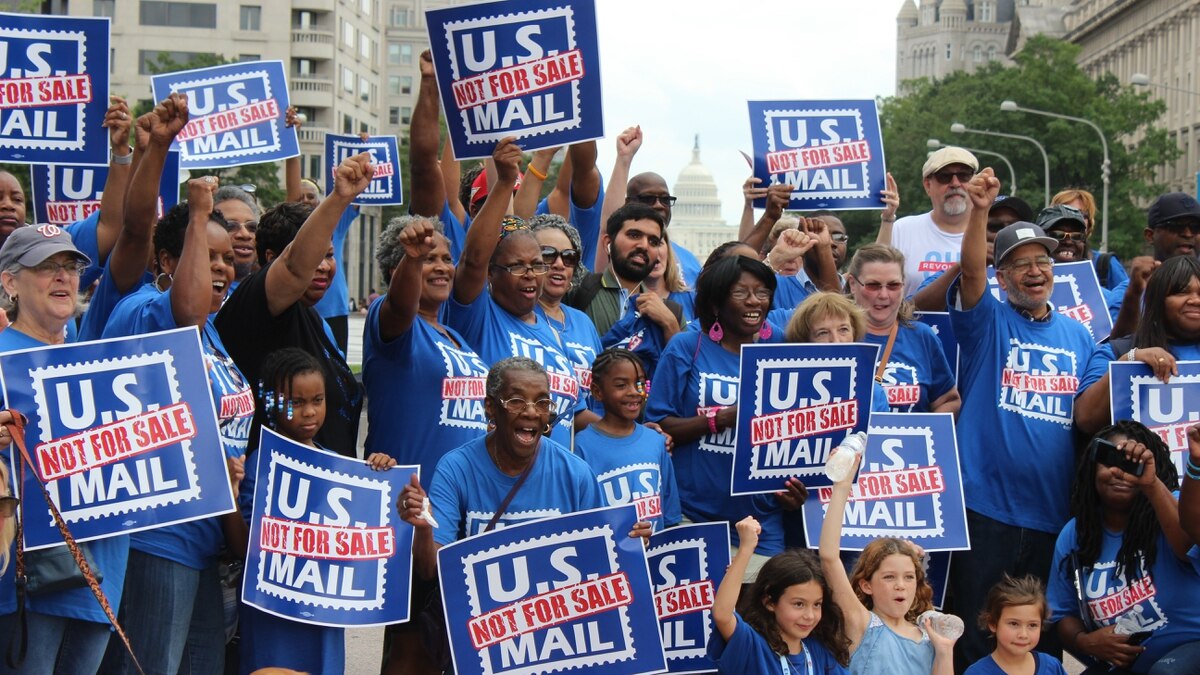 Members of a variety of federal employee unions rallied outside congressional offices across the country and in Washington, D.C., to protest potential privatization of the U.S. Postal Service (via Federal Times – October 2018).

The Postal Service is foundational for our economy and democracy: The Biden administration and Congress must protect and strengthen it – Postal services should be expanded for the public good, not diminished by special interests

By Monique Morrissey – December 16, 2020
As millions of people rely on the United States Postal Service (USPS) this holiday season, a new report by EPI economist Monique Morrissey provides a comprehensive overview of this beloved institution—and the repeated attacks on it from special interests and anti-government ideologues.

In the report, Morrissey explains that the Postal Service is a model of efficiency, providing guaranteed delivery at the same rates across the country, including rural and poorer areas that are more expensive to service. Americans express a high degree of trust in the Postal Service to securely deliver everything from mail ballots to life-saving medications. The public trust in the post office is an asset that could allow it to successfully expand the services offered, notably postal banking to help low-income Americans who currently rely on payday lenders and other high-cost financial services.

“Postal delivery connects family and friends, helps consumers and businesses, and fosters democracy. To our country’s founders, the Postal Service’s social and civic purpose—connecting people to each other and fostering a well-informed citizenry—were as or more important than its economic benefits,” Morrissey said.

The report details how USPS provides good jobs for workers without bachelor’s degrees—especially for Black workers and military veterans. Postal workers are better compensated than many other workers with similar education, years of experience, and hours worked. However, this advantage is shrinking as the Postal Service increasingly relies on outsourcing and noncareer employees who receive meager benefits.

Privatizing the Postal Service, whether through outright divestment or outsourcing, has been a long-standing goal of conservative think tanks and corporations that stand to benefit, according to the report. The Trump administration revived these efforts, spurred by the president’s opposition to mail voting and his animus toward Amazon, a major USPS customer. The president and his party’s adversarial stance toward the Postal Service and government in general also can explain their refusal to extend the same pandemic relief to the Postal Service as they did to airlines and other private corporations, says Morrissey.

The pandemic only made a bad situation worse. Morrissey illustrates how conflicting demands by Congress and regulators put the Postal Service in a precarious financial position even before the crisis.

“Allowing the Postal Service to fail, or speeding up the privatization process already underway, would harm the national economy while devastating many vulnerable households and communities, notably homebound seniors, people in rural areas, and residents of low-income urban neighborhoods,” Morrissey said. “The corporations that stand to gain will do so not because they are more efficient than the Postal Service, but because they can shed public service obligations and pay their workers less. The Biden administration and Congress must act to undo the damage and allow the Postal Service to adapt to meet unmet needs, including the revival of postal banking.”

Read the report: The war against the Postal Service