January 12, 2016
It is easy to overlook the problem of the unbanked and underbanked in the United States — if for no other reason than it is far from the endemic problem here that it is in other parts of the world. However, depending upon the exact data set one is using, a full 10 percent of American adults are unbanked, with another 17 percent of them underbanked (meaning they have some basic banking services but are not using the full suite of financial services available to the average consumer).

While having a financial system that is 73 percent inclusive is actually pretty good news, particularly when one looks at the global rankings in this area, it’s not great news and means that almost a quarter of the adult population is insufficiently banked. And that literally adds up to tens of millions of people.

However, integrating that last 25 percent into the financial mainstream is challenging, as there are a myriad of reasons why they are outside. A one-size-fits-all solution is hard to come by.

Some consumers have incomes so low that interacting with financial services is too expensive. Others receive income too irregularly to mesh well with the sort of monthly fee schedule imposed by mainstream financial services. Some lack physical access, while others lack awareness and education about the types of financial services available to them. Then, there are those who just straight up don’t like or trust banks.

Assuming that the only solution for that last group is some combination of gold, guns and bitcoins, those first three sets of consumers are where the bulk of interest lies in solving the problem of the un- or underbanked in the U.S. There has been progress, but progress is slow.

But Democratic presidential nominee Bernie Sanders has an idea that he thinks will take a big bite out of the problem that he’s been banging the drum on for at least the last half-decade. Sanders’ solution for the un- and underbanked in America in three words? 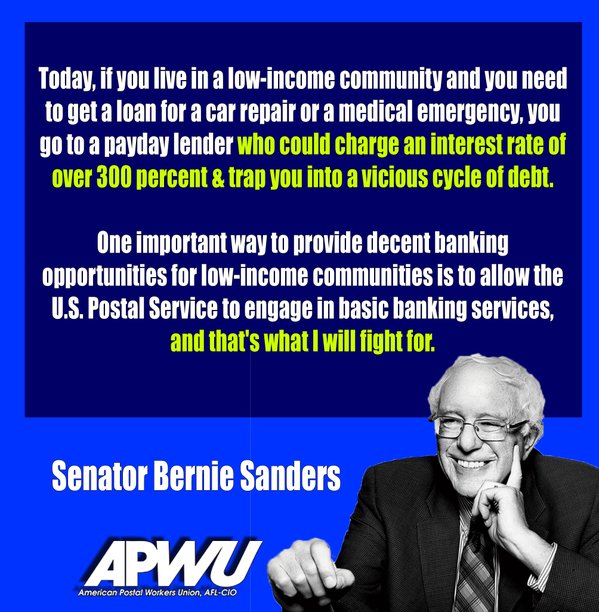