The attached was written by PK Wood, retiree from the APWU Dayton, Ohio Retiree Chapter:

The case for retiree involvement in the APWU, including ample representation at the national conventions starts and ends with just one word, SOLIDARITY. This is the basis of the entire labor movement. This is what gives us our strength and power to negotiate for the fairness we deserve. 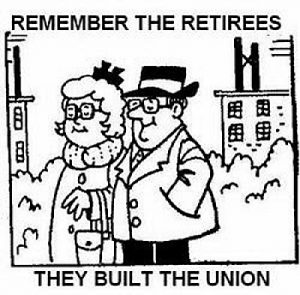 In the beginning, back in 1992 or thereabout, the great “early out” exodus occurred and many took advantage of it. Retired postal “family” often met for coffee or lunch, not ready to let go of the life they had known for so many years. Some of us continued to support the union, particularly COPA and our legislative issues but the US Labor Department came along and said, “hey, you can’t take COPA money from these folks because they are no longer a part of the union.” At that time, action was required and it was quickly taken, thus the APWU RETIREES Department was born. Local chapters were chartered and a dues rebate was structured and passed at the convention. It was decided to “give” the retirees one delegate to the convention for each of the 5 regions. They would be elected by retired members who were dues paying members of the APWU Retirees Department. All well and good, 28 years ago but today, not so much. At that time a few retirees might attend the convention and we were welcomed to sit in the visitors section and not recognized that we were even there .But, let’s just fast forward a bit here and see what happened.

Surprise, surprise surprise! The retirees got busy. Soon we were having our own meetings when we gathered at conventions and we were included in the all craft conference in Las Vegas. After years of fighting for our place in the union, we won the right to sit with our locals on the convention floor, to actually elect our director and many other constitutional changes which benefited the retirees. We have been fortunate to have directors who advocated for us and made life a little easier for us to participate in our union. Union members discovered that retirees could and would picket a Staples store, contact our congress people on a regular basis, stand in front of our post offices and tell the public that the US MAIL is not for SALE! When we are called on for action, we show up. Many retirees work diligently to help elect labor friendly candidates for state and national offices. Everyone knows what is at stake here in 2020, and we retirees are geared up and ready to do our part. The beautiful part is that we are an important part of our union and we are EXEMPT from the dreaded Hatch Act. This is the hammer held over the heads of federal and postal employees which prevents them from most political actions. Not to worry, the retirees have your back, brothers and sisters. We have your back!

With all that retirees bring to the table, which, by the way includes good money that goes into the APWU general fund along with expertise and experience that you will never find in a labor class and over 40,000 members who are an asset and not a liability. Oh and yes we give more to COPA than any other entity of the APWU, yet we have no actual representation in this great union of ours. When we bring forth resolutions for your consideration at the convention, you don’t even want to discuss them. Constitutional changes for retirees have taken years to garner a favorable vote. You have stood at microphones and talked about us like we are “over the hill”, useless EX members of our union. Be assured that we are still members of the American Postal Workers Union and we are still working. We work to save the rights and safety of postal employees, we work to pass legislation favorable to the present day employees and yes we work to protect our pensions and those of future retirees. We have 90 years olds who spend more time fighting for postal employees rights than any of the rank and file members. This brings us to another reason to give retirees a voice and vote in our union, March 28, 1970. Yes, 50 years ago our older retirees stood, with their jobs on the line and valiantly won the right to collective bargaining for you today. That, my brothers and sisters was Solidarity!

Today, workers are retiring earlier hence the face of APWU retirees is younger. Local chapters are a part of their political organizations ,central labor councils, even running for office in some cases. We communicate with our neighbors the absolute need for them to help save their US Postal Service. A few years ago when there was a move to close down several smaller post offices and branches, mayors and city council members headed up efforts to stop that move and we won! This comes about because your retirees have the ear of local politicians. They are respected members of the community who are listened to.

It’s time for you to take another look at your retirees and evaluate us properly. Yes, we may run around on our scooters at the conference and conventions, but folks, that is just a mode of transportation to get us where we are going a little faster. As for what we do from our computers, our phones, letter writing, sitting in our congressmen’s office, writing those checks to COPA, running for office and in some cases paying full dues to be eligible to run for local, state and national union office, we are UNION. If you don’t ascribe to that fact, then maybe you don’t have your heart in the union, maybe solidarity is not a word in your vocabulary. When the people who built the APWU are excluded, that is not solidarity. If those members cannot have a voice and vote in their union, it is a brick falling from the middle of the building. In the near future you will hear and read other opinions of my fellow retirees , I do hope that you will give them your attention. Our goal is one, SOLIDARITY FOREVER.