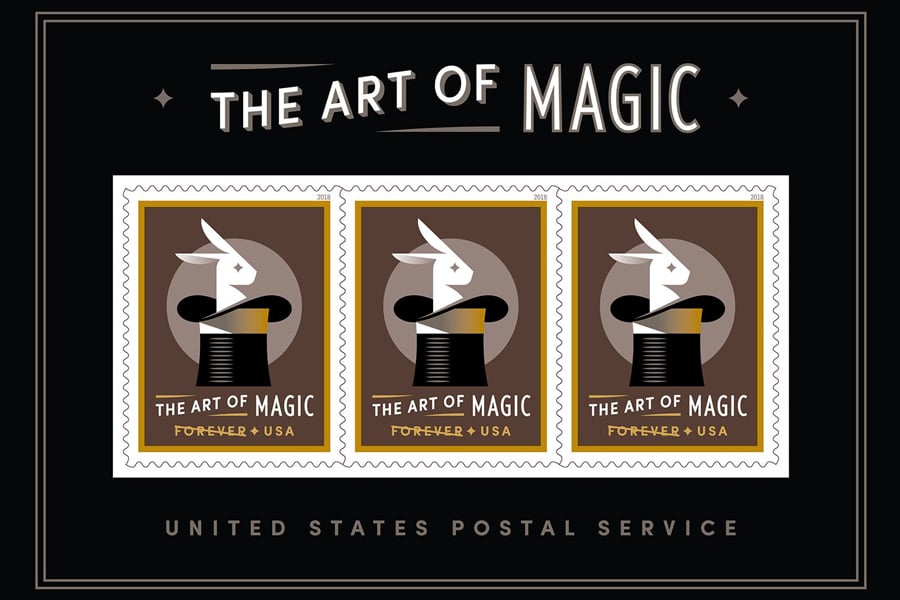 The Art of Magic souvenir sheet features three identical stamps that show a white rabbit in a black hat. By rotating each stamp, the rabbit “pops” out of the hat.

The Art of Magic stamps release will include a special souvenir sheet that mimics a famous illusion.

The souvenir sheet will feature three identical stamps that show a white rabbit in a black hat. By rotating each stamp, you can see the rabbit “pop” out of the hat.

The Postal Service used lenticular printing, a method that creates the illusion of movement and depth, to produce the stamp.

Another version of the stamp, without the magical effect, will appear on a pane of 20 Art of Magic stamps that feature depictions of classic magic act. This pane will also include stamps that show a fortune teller using a crystal ball, a woman floating in air, an empty bird cage and a bird emerging from a flower.

USPS will release the pane and souvenir sheet Tuesday, Aug. 7.

The souvenir sheet with the special effect is the latest stamp innovation.

The Postal Service released scratch-and-sniff Frozen Treats stamps in June, and last year, the organization introduced Total Eclipse of the Sun, a stamp that uses thermochromic ink and changes when you touch it, and Have a Ball! stamps that have the look and feel of balls used in eight sports.