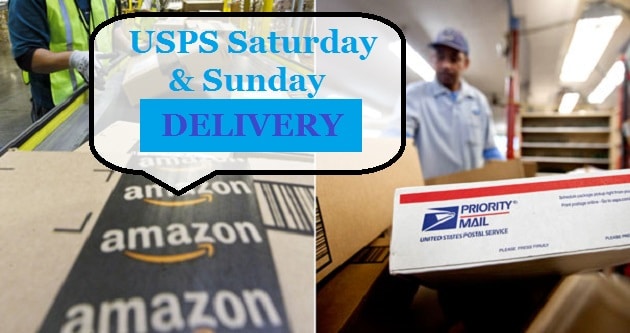 By Tom Caldwell – July 25, 2017
On a given Sunday, the United States Postal Service delivers 300 packages in Gilford and Laconia, and has been doing so for about a year. “The customers love it,” said Michael Quinn, officer in charge of the Laconia Post Office.

Just a few years ago, seeing a decline in first-class mail as customers turned to email, instant messaging, and social media for regular communications, the postal service was looking to restrict mail delivery to five days a week, eliminating Saturday deliveries. Now it delivers Express Mail and packages seven days a week, although not all locations handle the Sunday mail. The Laconia Post Office is the distribution center for Gilford and Laconia, Quinn said.

Steve Doherty, USPS communications specialist, said the internet age has not only transformed the way people purchase products, it has shifted their mail habits. That led Former Postmaster General Patrick Donahoe to suggest eliminating Saturday deliveries as a cost-saving measure, estimating that it would save as much as $3 billion a year.

Postal unions campaigned against cuts, saying it would deny necessary services to the elderly and rural residents, and members of Congress blocked the plan, passing legislation that required service at least equal to what was offered in 1984.

Yet the postal service was seeing another trend that offered a way to make up some of that lost first-class revenue. Many online retail companies were promising premium delivery in one day. “It was what our customers were looking for,” Doherty said. “The business need was there, and we stepped up.”

Even before Donahoe’s proposal to reduce Saturday delivery, Amazon.com was approaching the postal service about a partnership to deliver packages on Sundays and holidays. In 2013, it announced a pilot project to have the postal service make Sunday package deliveries in Los Angeles and New York, gradually expanding to other cities through a five-year contract.

“We were already delivering Express Mail on Sundays,” Doherty said, noting that carriers had been making all-weekend deliveries around the holidays for at least a decade in order to keep up with the Christmas rush. “But offering Sunday deliveries year-round has evolved more recently.” While first-class mail has continued to decline, Doherty said, “Our business has been shifting with the boom of online retailers, and we’ve been adapting our business model to suit that.”

“There were challenges, I suppose,” Quinn said, noting that he was not there when Laconia began delivering Amazon.com packages on Sundays. “With any new process, it takes a while to work out the bugs, but it was invisible to our customers.”
Postal workers remain divided on the issue of Sunday mail deliveries, some seeing it as an opportunity to make extra money and others seeing it as an intrusion into their weekends.

Lakes Region postal workers did not want to go on the record with their views, referring inquiries to Doherty or Quinn. Off the record, however, some cited the additional sorting required for Sunday package delivery as a negative and said they are glad that job currently falls to the Laconia Post Office.

Quinn said he has a temporary clerk who sorts the Sunday packages, while subs — part-time or contracted workers — handle the deliveries. “We have hired some just to work on Sundays,” Quinn said. “Some people want to earn extra money.” Doherty also said many of the carriers are happy doing Sunday work because it provides flexibility.

A July 14 opinion piece in the Wall Street Journal by Josh Sandbulte, whose money-management firm owns FedEx stock, claimed that the USPS’ fixed costs have risen faster than the income from package delivery and he argued that first-class mail is subsidizing Amazon package delivery.

Doherty responded, “If it wasn’t profitable, we wouldn’t be doing it.” He said Amazon, while a major player, is not the only company that uses the postal service for Sunday deliveries. He said there are a number of ways that retailers can get special rates, including by presorting, getting their product close to the delivery point, and shipping by volume, “but that’s across the board to any of our shippers. The more sorting you do, the cheaper it is.” He did acknowledge that “A lot more money goes into the processing and packaging of deliveries,” but he said, “Each of our products is designed to stand on its own, as far as profitability.” “We’ve had a shift away from full-time to a flexible work force, where their typical week may be Thursday through Monday, so no overtime costs are associated with Sunday deliveries,” he said. “When you look at the hours, some people find it suits their personal life. It’s not for everyone, obviously, but finding people to work on Sundays has not been a problem.”

Quinn said Laconia is fully staffed right now, but said anyone who wants to work Sundays should apply at usps.com.

As to customers, Doherty said, “Years ago, people didn’t expect Sunday delivery. Now they want it right away, and we’re adapting. “Doing away with six-day delivery and going to five days was a thought at one time, but with this new era of overnight packaging, I don’t foresee that coming back up as a suggestion. I don’t think the public was generally opposed to the elimination of Saturday mail deliveries, but when you put packages into it, it’s a different story. That shifts our dynamic away from the thought of five-day delivery,” Doherty said.