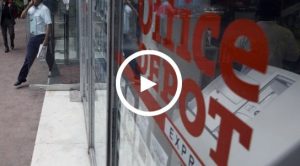 (Bloomberg) — Staples Inc. plans to buy Office Depot Inc. for about $6.3 billion, forging a deal that will reduce the U.S. office-supply industry to a single major chain and test the limits of antitrust regulators.

Office Depot shareholders will get $7.25 in cash and 0.2188 of a share in Staples stock at closing, the retailers said in a statement Wednesday. The offer represents a premium of 44 percent over the price on Feb. 2, before news of the talks was reported.

The two companies, which agreed to the merger after pressure from activist investor Starboard Value, would create a retail chain with about $39 billion in revenue and thousands of stores. The move is expected to draw scrutiny from the Federal Trade Commission, though regulators have been increasingly willing to approve retail mergers in light of burgeoning e-commerce competition.