The following is an mail exchange on the Employee Engagement Program via Sam Wood, President – Southwest Florida Area Local / APWU:

I read your e-mail that you sent to Dan Gray (below) concerning the “Employee Engagement” Program. I am local President of the Southwest Florida Area Local – American Postal Workers Union. It is my and other local Presidents, E-Boards and representatives who believe that programs like these are just put out to give employees this warm and fuzzy feeling that something positive may come out of these programs. But, as we have learned over the years, the programs like “Voice of the Employees” and “Postal Pulse” are just ways to undermine employees at the bargaining table during contract negotiations. They have nothing to do with changing the culture of the workplace. I hear from employees from all around the country say that nothing has ever changed in the workplace due to these types of programs.

In your e-mail, you state: “Nothing gets better until you can not only identify the cause of the sickness and then treat the problem not just the symptom.” Huh? You go on to say that: “It has taken 240 years to create this culture.” Really? 240 years? Our local has contacted Suncoast District Management for months now on issues where employees are being disrespected, harassed, improperly disciplined in not only the APWU but in the NALC, NARLC, and the NPMHU. Guess what, NOTHING HAPPENS! One Clerk Craft Employee who had a last chance agreement because of customer harassment was actually promoted to a Management Position in Naples, Florida and now treats employees the same exact way as she did customers, and she gets kudos for it and she is never disciplined for her actions. Naples has had a long history of the harassment of its employees and its well documented through e-mails, letters and labor management meetings. Nothing changes.

Another Postmaster was forced to transfer to Punta Gorda because of sexual harassment (EEO) at an office near Daytona. Florida, he then had a DUI and the USPS received letters from the Chamber of Commerce for similar actions (from previous EEO’s) that forced them to move him to Venice, Florida. Again, there is no recourse. If this were a craft employee, they would have had more serious implications. Stations are short staffed, employees are being harassed by managers, employees are arguing or in some instances fighting each other. Employees still receive discipline on poor Mystery Shops which violates a directive from the USPS. The list goes on and on. Postmasters, Managers and Supervisors have and are being empowered to do what they want to their employees.

These issues did not take 240 years to create, and the problems could be fixed immediately if management wanted to fix them. So when you make the statement “Let Us Be Your Advocate”, do not be discouraged when we say we don’t believe you. We have heard this all before and know that you have no power to resolve issues like these or other issues. As the great Rock Band Def Leppard stated in one of their song: “Cause All I Want is Some Action, Action, Action, Not Words, Gimme Action, Action, Action Not Words.” Until such time as we see that, we will never believe is some new program that is put out that is just another gimmick.

This new program is a direct result of the recent efforts made on behalf of the Broward County Florida Area Local (See Attached Arbitration Award, thanks NBA Mike Sullivan). President Jeff Riddell and Vice President Sandra Munoz have seen the same negative results as we in Southwest Florida have seen. Thanks to them taking a stand, we no longer have to put up with USPS Programs that Do Not Work! Thanks however for the neat little badge holders that all employees in Fort Myers, Florida were given. Im sure many of them found their way to the trash can as employees do not believe that anything will ever change for the better under the current USPS Leadership. To get the Southwest Florida Area Local to “Buy In”, then lets see some ACTION NOT WORDS! Until then, Thanks but No Thanks, We are not interested. 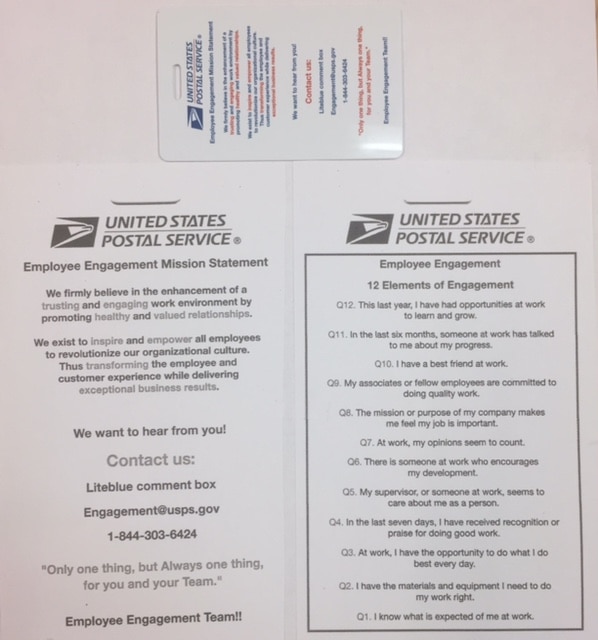 Actually my observations are right. The USPS finished in the bottom percentile (basically out of 400 companies the bottom 3). When employees asked about results no information is given. The PMG herself doesn’t state actual results on her videos to employees only that results were not that good. Not that good the results were horrible. You stated “It has taken 240 years to create this culture and there are some amazing managers and some not so amazing.”240 years of ignoring an issue? I have worked over 25 years for the USPS, the postal shootings were occurring when I first was hired, but no cultural change really took place, even after these horrific incidents. Yes, there are some good managers and supervisors, but the bad apples are not dealt with. We have supervisors that think its funny to ask the only Jewish employee to sing Christmas songs (silent night) during Christmas in front of 50 coworkers. We have another supervisor who went on a rant about Muslims in front of employees and both supervisors are in their positions with no discipline occurring. We have supervisors and managers who think bullying and sexual harassment is a right of their job. They get promoted or ignored by their superiors. Yes non supervisors do the same things, but they are disciplined and they do not hold a position of authority over others. No employee regardless of position should be treated in a disrespectful manner. I do speak up because any employee (bargaining unit or non) should be able to come to work without being harassed or degraded. Most employees want to do their best, but with this 240 years culture that is continually ignored I do not believe there will be change. I have watched these programs come and go. It is mostly smoke and mirrors nothing more. I started employment with the USPS after I served in the military and the job does allow me to earn a good living. I would never recommend the Postal Service as a place of employment for either of my children. That is a sad reality. I hope within my last 5 years of employment with the USPS I will get to see a real cultural change, but until I actually see some real action by the USPS it is as usually nothing but lip service.

Your observations and experience are not entirely right but they are not entirely wrong either. We have made everyone that we could make aware of how poorly we faired in the results of the Postal Pulse. We were in the bottom quartile (the lower end of the 25th percentile). It is not really that surprising because what you say is true. There are those who value numbers more than people but because you recognize that, you should also recognize that nothing changes if nobody sees it. Nothing gets better until you can not only identify the cause of the sickness and then treat the problem not just the symptom.

But just like it took years to create this path we are on, it will take years to redirect it. We are not naïve to believe that we are going to change every manager, every non-manager, and every new employee overnight. But I am comfortable and confident in telling you this; where we are aware of those managers or anyone else who is an impediment to changing this culture and allowing everyone to have an appreciation for their work, achieve self-worth, and are treated with dignity and respect; people will know. No more hiding in the shadows and keeping things under wraps.

I have talked enough so let me end with this. Let us be your advocate. Just as you have done through this email; if you want change let us be your advocate. If something is not right; don’t attack the system; let’s address the cause. Just as you have written your perspective; give us something to go on and if we don’t act on that information, then tell us we are full of it. But, please at least give us a chance. We on the engagement team (and countless others who also want the same as you) are employees to.

Be well and thank you for sharing your thoughts.