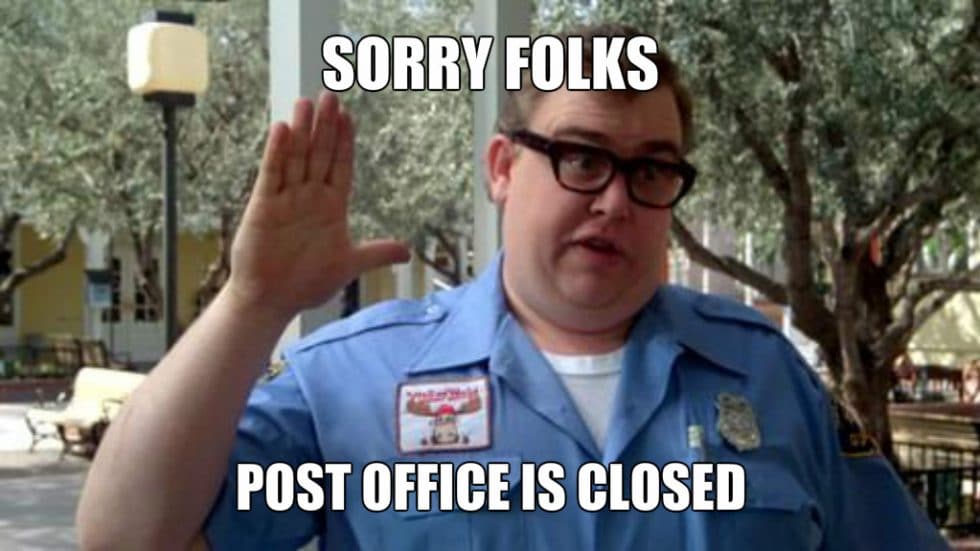 By John Beaudoin – January 8, 2016
I feel like John Candy should be dressed in his Wally World security shirt greeting people at 210 SW Market St. these days.  That way, we would know, firsthand, that, indeed, the downtown Lee’s Summit post office is closing soon.

Unlike the communication and town hall meetings provided last year when the United States Postal Service was contemplating closing the downtown postal location and moving those services south to the Green Summit Annex, now, as the days were clearly numbered for the facility, sharing that message has been scarce.

According to postal officials, they were passing on information about the closing date through signs at the office and as people were asking questions inside the facility.

In the age of social media and local newspapers, I would think the postal service would be better equipped to share this type of vital information, not only to the daily users of the post office, but to the hundreds of post office box users who may not happen upon a sign hanging in the lobby.

Heck, it’s the post office – wouldn’t it have endless resources to mail out a postcard to the residents of Lee’s Summit informing them that, officially, all services were moving from downtown to 1404 SW Market Street?

Of course, the pending closure wasn’t completely surprising. It’s true that many knew this was coming. It’s also accurate that we were told by postal officials that they would not be closing this location until it was under contract. We know now that is untrue. And all you have to do is look at downtown Blue Springs to see the USPS will close facilities without a contract in hand. That one has been empty for years.

These communicative missteps have a toll on our City Hall and our elected officials, too.

“It’s disappointing the postal office is being taken away from downtown and moved to an inconvenient location for many residents of Lee’s Summit,” District 1 Councilman Rob Binney said. “And that the communication about the closure has been limited through official channels … the only notification has been through placards on the front door or at the lobby.”

Now, from a development standpoint, hopefully many can see the value in redeveloping that post office site and the acreage that surrounds it. Honestly, that is prime-time land in our downtown area that should be put to better use. It’s just a shame the postal service didn’t find value in keeping a small storefront or kiosk downtown to service the core of Lee’s Summit.

According to Postmaster Albert Esquivel, the sale process is still a work in progress. And a silver lining, from a workforce standpoint, is that all employees will also move over to the Green Summit Annex.

So, here is your official notice: Jan. 16, will be your last day to do official business at the downtown post office. And P.O. boxes will stay open through Jan. 18.

These are all things the United States Post Office should have told you through their preferred means of communication – the mail – and in your P.O. Box. Maybe that notice will come next week.