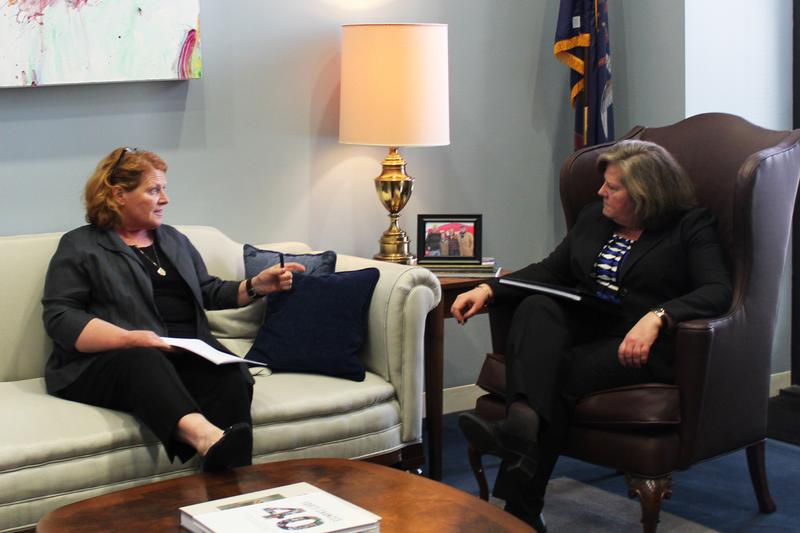 Press Release – March 10, 2015
WASHINGTON, D.C. – During her first meeting with the new U.S. Postmaster General, U.S. Senator Heidi Heitkamp pushed for improvements to mail service and delivery in rural areas across North Dakota and highlighted how the Postal Service can support its employees as the state’s population continues to grow.

Heitkamp met with Megan J. Brennan, U.S. Postmaster General and United States Postal Service (USPS) Chief Executive Officer, who took over as head of the Postal Service last month. Heitkamp stressed to Brennan that she hopes the agency will bring a stronger focus to addressing the mail delivery, service, and postal worker challenges in rural areas like North Dakota.

During the meeting, they also discussed Heitkamp’s Fix My Mail initiative and the challenges North Dakotans have faced with reliable and timely mail service, particularly in rural areas. Last January, Heitkamp launched her grassroots Fix My Mail initiative to gather stories North Dakotans from across the state have encountered with poor service, not receiving their mail, and other problems. Since then, Heitkamp has received stories from more than 200 North Dakotans. Heitkamp and Brennan also discussed the Postal Service’s recent reduction in service standards – including cancellation of overnight mail delivery – and how it has already impacted North Dakotans throughout the state.

“It’s no surprise that I wasn’t particularly happy with the previous Postmaster General. With new leadership in place at the Postal Service, I’m hopeful the organization renews its focus to supporting mail delivery and service in rural communities and support for rural post offices,” said Heitkamp. “Nowhere is reliable and efficient mail delivery more needed than in rural America. Postmaster General Brennan and I had a good and important discussion and I hope to keep an open dialogue moving forward. Our state’s population is growing by the day, and it’s critical that North Dakotans have access to the mail services they need, where they live – a standard that should apply everywhere in 21st century America – and I’ll continue to make sure the Postal Service is aware of North Dakotans’ concerns.”

Last June, Heitkamp brought Senator Tom Carper (D-DE), then-Chairman of the Senate Committee overseeing the U.S. Postal Service, to Williston, where they held a roundtable discussion to hear about the challenges North Dakotans face with the Postal Service and about efforts to improve it. During Carper’s visit, Heitkamp shared some of the most prevalent themes of North Dakotans’ stories from her Fix My Mail initiative. Heitkamp continues to push for comprehensive postal reform legislation in the Senate that stands up for the needs of rural America.