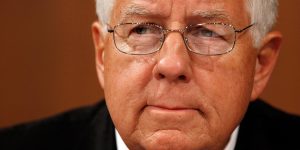 The changes would result in $170 billion in savings over 10 years on the backs of federal employees, Senate Budget Committee aides said. The recommendations were based in part on suggestions made by the National Commission on Fiscal Responsibility and Reform — known as the Simpson-Bowles Commission — which called for cuts to the federal workforce and civil servants’ compensation as part of a larger deficit reduction effort.

Similar to the House Republican budget introduced Tuesday, Senate Republicans, led by budget committee Chairman Mike Enzi, R-Wyo., proposed a 50-50 split in federal employee and agency contributions to defined benefits packages. This would result in feds contributing 6.35 percent of their paychecks toward their pensions.

Congress has already raised the pension contribution level for newer employees twice in recent years, creating a three-tiered system in which employees pay between 0.8 percent and 4.4 percent of their paychecks toward their defined benefit, depending when they were hired. The $170 billion in total workforce savings would eclipse cuts made since the Great Recession, which federal employee unions estimate to be $159 billion.

The House budget did not include any specific mention of agency workforce attrition measures, but Senate Budget Committee aides said their blueprint embraces Simpson-Bowles initiatives to fill only a portion of the vacancies created when current federal employees leave or retire. The budget would also make changes to the Federal Employees Health Benefits Program to make it “more affordable.”

The goal of the Simpson-Bowles recommendations and other proposed reforms to the federal workforce is “to make government more like private industry,” a committee aide said.

Overall, Enzi’s plan would slash discretionary spending at non-Defense agencies by $236 billion below sequestration caps over 10 years. Committee staff said their budget would streamline and consolidate programs, but added a significant portion of those savings would stem from reductions in benefits spending by agencies. The total spending cuts are far less than the $759 billion over the same period called for by House Republicans.

“This balanced budget delivers hardworking taxpayers a more effective, efficient and accountable government, which supports Americans when it must and gets out of the way when it should,” Enzi said of his blueprint, which saves a total of $4.4 trillion compared to President Obama’s. Enzi pledged to “find common ground and cooperate to get things done.”

Under the Senate blueprint, Defense spending would stay in line with caps required by the Budget Control Act. The plan would not dramatically increase emergency spending in the Overseas Contingency Operations fund, as would the House proposal, but would create a Defense reserve fund for future Pentagon expenditures.

Like the House proposal, Enzi’s plan seeks to balance the budget in 10 years, repeal the Affordable Care Act and make major cuts to Medicare and Medicaid. Both the Senate and House budget committees began marking up their blueprints Wednesday, and hope to start floor debate next week. Ultimately, Republicans plan to bring their respective budgets to a conference committee and vote on a final framework by April 15, at which point the more specific appropriations process could commence.