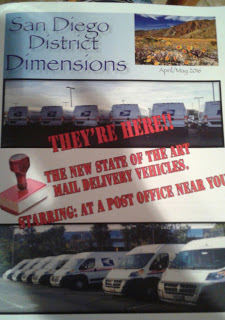 I’m sure that if you work for the Post Office your Mailbox is flooded with Postal propaganda designed to boost your employee morale by reassuring you that our leaders are wise, enlightened people who have weighed their decisions carefully and have a firm grip on the reins. These newsletters are decorated with pictures of employees who seem to be so happy going about their daily duties that they would probably work for free, if allowed to. This, of course, is their desired effect, to hypnotize you into thinking that it is such a privilege working for the PO that you really don’t need to be asking for more money when contract time rolls around.

The colorful bulletins – sometimes spewed out from the Area Office, sometimes by the District, are so littered with lies, misrepresentations, and half-truths that they would make Nazi propaganda minister Joseph Goebbels shake his head with shame if he was still alive, and not rotting in one of the nine circles of hell.

This mailbox littering, straight to recycle bin fodder I refer to as the District Dementia; not because I’m making fun of Alzheimer’s victims, but because this tree killing waste of paper is really out of touch with reality, makes me shake my head too – not with shame but with disbelief. On Page 5 there is a photo of a new Postmaster being sworn in. She looks incredibly wise and benevolent standing there raising her right hand, but having personally made her acquaintance I know she is neither of these things. On Page 8 there is a diagram of some trendy pie in the sky abstraction called the 5-S system. Did we give up on six sigma and are now subtracting because smaller numbers are better for small minds? The 5-S flavor of the month announces that it involves employee participation, which elicits a chuckle from my cynical head, because Postal Service and employee participation mix together like Trump and Sanders supporters at an Albuquerque Cinco de Mayo fiesta.

The photo on Page 3 is the most egregious of all. This is the one that really rankles me, because it shows a Postal Employee standing up in the rear compartment of one of the new Promaster vehicles, which the Dementia proudly proclaims to be “State of the Art.” The letter carrier in the picture is grinning so widely it looks like his face will split in two if he gets any happier. Somebody probably just told him a dirty joke, and the Dementia photographer happened to be walking by just as he was giggling at it. He can’t be smiling because he is actually happy driving this beast. There’s no way.

More / Source: The Postal Tsunami by Mel Carriere: San Diego District Dementia Sings The Praises of The Promaster – but Tsunami Is not so Sure