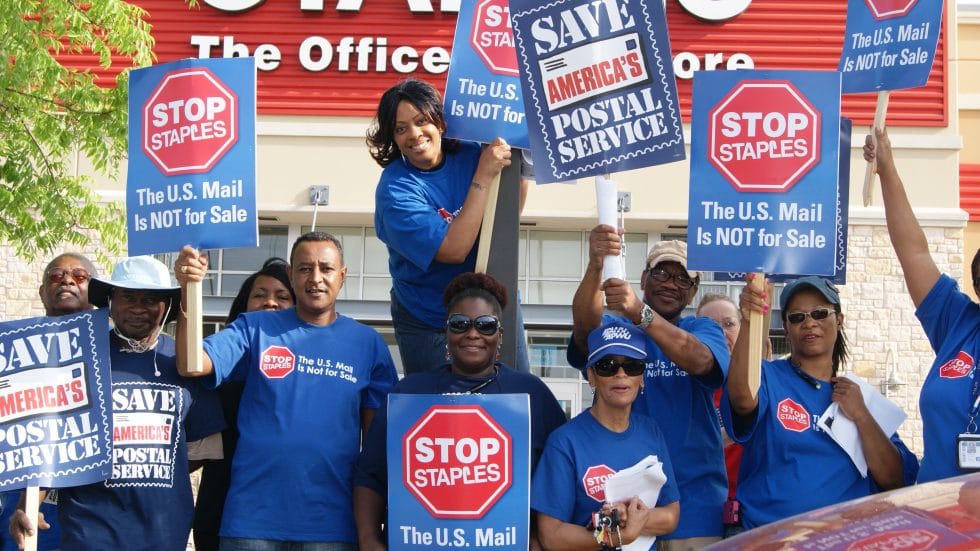 A ‘Stop Staples’ Protest in Dallas.

The decision follows Staples’ failed attempt to merge with Office Depot, a business strategy Sargent championed. “The company was weakened by the failure and it ended Sargent’s tenure,” APWU President Mark Dimondstein said.

The merger would have increased prices and limited choices for individual customers and small businesses, Dimondstein pointed out, and the union played an important role in support of consumers by publicly opposing the merger when it was being considered by the Federal Trade Commission.

“The Staples brand was also severely diminished by the company’s dirty deal with the Postal Service – a major move toward privatizing a great national treasure,” Dimondstein added.

Sargent’s departure as CEO presents a fresh opportunity for the office-supply company to “do the right thing and get out of the postal business,” he said.

“Staples’ stock is down, revenue is declining, and stores are closing,” Dimondstein noted. The number of stores is down to 1,900 worldwide, from a peak of 2,300, the Boston Globe reported, and the company’s stock has plunged to less than $9 a share, down from a peak of $28 in 2006.

The APWU launched a boycott of Staples and Quill.com in 2014, after the company entered a secretive deal with the Postal Service to set up faux post offices in its stores – staffed by low-paid and barely trained Staples employees rather than highly-trained, accountable postal employees.

At daily protests outside Staples’ stores, union members and supporters point out to customers that the deal jeopardizes service and threatens the future of the public Postal Service, along with thousands of living-wage jobs.

The AFL-CIO has endorsed the “Don’t Buy Staples” movement, along with numerous labor organizations, including the American Federation of Teachers and the National Education Association. Teachers are a key ally in the fight, Dimondstein said, because they purchase so many supplies for their classrooms.

Sargent will be replaced, at least temporarily, by Shira Goodman, the retailer’s president of North American operations. A permanent CEO will be selected by a special board committee. Sargent will continue to serve as a director through January 2017, the end of the company’s fiscal year.

“Sargent’s replacement should be someone who is ready to end Staples’ foray into postal work,” Dimondstein said.