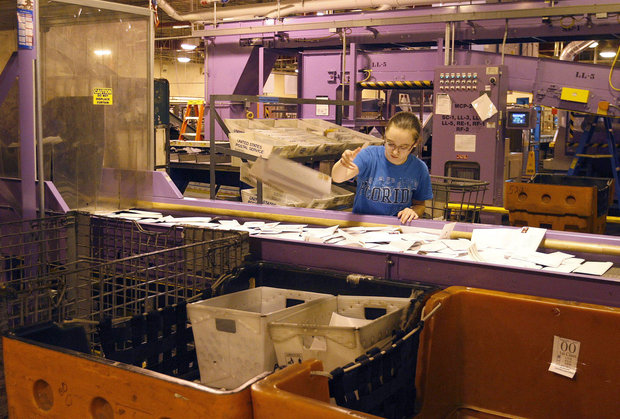 Sierra Wilkins sorted non-machineable mail at the United States Postal Service’s processing and distribution center on Nandino Boulevard in Lexington in July. That center is expected to close as part of national cost-cutting.

Op-Ed By Fredric Rolando – January 26, 2015
The Herald-Leader has done a good job reporting on the planned closing of the Lexington mail-processing facility, including how slowing the mail would inconvenience residents and how dozens of lawmakers contend that the Postal Service hasn’t followed its own procedures for such actions.

But there’s a bigger picture here — the financial factors cited by Postal Service leaders as necessitating these closings simply don’t stand up to scrutiny.

The Internet has sent mail volume tumbling, it claims, and as a result revenue is shrinking and red ink abounds. So as distasteful as it may be to degrade service for Kentuckians and folks around the country, there’s no choice.

Let’s examine that claim, by looking at the facts.

The Postal Service, which supports itself by revenue earned from selling stamps — not by taxpayer money — had an operating profit of $1.4 billion in fiscal year 2014, and $633 million in the first month of fiscal year 2015.

Its $6 billion in available cash is the highest it’s been in years. The Postal Service has been operationally profitable since October 2012.

How has that happened?

As the economy gradually improves from the worst recession in 80 years, letter revenue is again rising. Meanwhile, as folks in Lexington and elsewhere increasingly shop online, delivering those goods has boosted package revenue.

That makes the Internet a net positive for USPS — auguring well for the future. And UPS and FedEx bring millions of their packages to the post office for “last-mile delivery,” with the efficient postal network saving money for the private carriers and their customers.

It makes no sense to degrade postal networks that have returned to profitability. Eliminating Saturday delivery would take a heavy toll on the elderly and on rural areas, as well as on Lexington’s small businesses, which are open weekends. Ending door-to-door delivery would force Kentuckians to traipse around neighborhoods in Kentucky weather in search of “cluster boxes.” And slowing the mail by closing Lexington’s plant is illogical.

Such actions would send the Postal Service itself into a downward spiral by driving mail and revenue away. And they would cost jobs.

The national mailing industry, which depends on a robust, six-days-a-week Postal Service, employs 7.5 million Americans in the private sector — including 114,212 in Kentucky. Meanwhile, 689,662 residents work for Kentucky’s small businesses, which would see costs rise if they had to contract with expensive private carriers to receive checks on weekends.

There is red ink, but it stems from politics, not the mail. In 2006, a lame-duck Congress mandated that the Postal Service prefund future retiree health benefits. No other public agency or private company is required to prefund for even one year; the Postal Service is required to prefund 75 years into the future and pay for it all in a 10-year period.

That $5.6 billion annual charge is the red ink.

This onerous and unfair mandate is what lawmakers need to address, rather than allowing service to be degraded to residents and businesses in the Lexington area.

Since it’s flawed public policy — not technological change — that’s damaging a national treasure, your readers have the ability to seek a change in that policy. And Kentucky’s representatives in Washington can help undo the damage previous lawmakers have done. 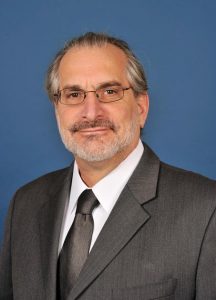 If they do so, the Postal Service — which is based in the Constitution, is the nation’s largest employer of military veterans, and is consistently rated the most trusted federal agency by the public — can continue to provide 153 million homes and businesses six and increasingly seven days a week with the world’s most affordable delivery network.

Fredric Rolando is president of the National Association of Letter Carriers.