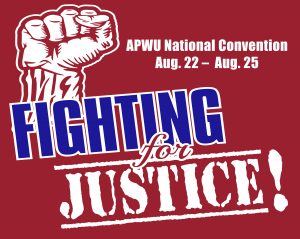 Rumor has it that Retiree Issues submitted to the National APWU to be addressed by the delegates at the 2016 National APWU Convention – Aug 22-25 have all been rejected.

As a general rule the Convention Constitution Committee has not been open to retiree proposals.

If you have a Retiree Issue or Resolution you want passed you must encourage locals and state delegates to support you.