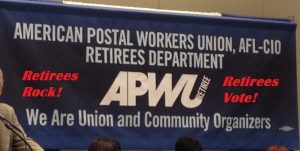 As a candidate who sent in a petition for an APWU Elected Retiree Convention Delegate, I received a mailing of the Official APWU Election rules from the APWU Election Committee. Included in the mailing was a document stating there are 41,850 Retiree Department members broken down by Region and category. However, according to  Bobby Donelson who looked up the APWU 2018 LM 2 filed with the U.S. Department of Labor (and available at the DOL website), there were 38,415 APWU Retiree Department members at the end of 2018.