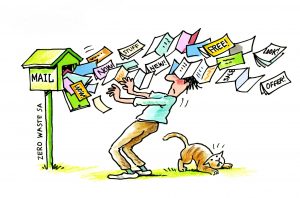 BOSTON – A legislative bid to make purveyors of circulars more accountable butted up Tuesday against the interests of postal workers who rely on the business of direct-mail advertising.

Rep. Denise Provost, a Somerville Democrat, unloaded a heap of Globe Direct mailers before the Committee on Consumer Protection and Professional Licensure, saying they had accrued around her doorstep after she attempted to be removed from the distribution list.

“I really hope that opponents of this bill will come and take this junk off my hands,” Provost said, before engaging in a brief exchange with the president of a postal worker’s union.

“Why would I take that away? You happen to have an irresponsible delivery method in Somerville,” said Scott Hoffman, president of the Boston Metro Area American Postal Workers Union Local 100.

While much of the Globe Direct circular is distributed outside the postal service, according to Provost, Hoffman told the News Service that postal workers also distribute the bundles packed with ads and coupons.

Hoffman told the committee that as letter writing has given way to email correspondence, direct-mail advertising has become a more important part of financing the U.S. Postal Service.

Provost’s bill, which has bipartisan support, requires direct mailers to include contact information where residents can request to stop receiving the deliveries with a $1,500 fine for violations of that requirement. The bill contains other fines for other violations.

“It will stifle business and it will have an adverse impact on the postal service,” Hoffman said, urging lawmakers to give the proposal “further study” – a legislative maneuver that often blocks a bill from passing without a vote to reject it. Hoffman said, “The American mail system depends on advertising mail.”

An attempt to contact Globe Direct by phone was unsuccessful and an email was not returned.

“It seems more that the uproar may be about irresponsible delivery when means other than the postal service is being utilized,” Hoffman said. He said, “It seems to be more of a nuisance issue than anything else.”

Hoffman said the requirements would hurt small businesses lacking the ability to pay for advertising on the radio or television. 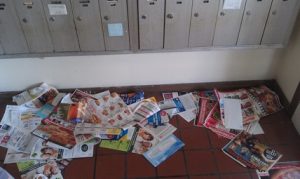 Claiming many people have been unsuccessful unsubscribing from Globe Direct, Provost complained that the circulars wind up underneath shrubbery and become rubbish on the street.

“These get dumped on the sidewalk,” Provost said. She said, “I’m not saying, ‘Put an end to it.’ I’m just saying, Give people a chance to opt out.”

Provost said she believes Globe Direct would not be a problem if it was delivered by the postal service and in presenting her haul referenced the Boston Globe’s recent newspaper delivery problems, quipping, “Between summer and Dec. 27 when the Globe stopped delivering newspapers in Somerville, this is what I received.”