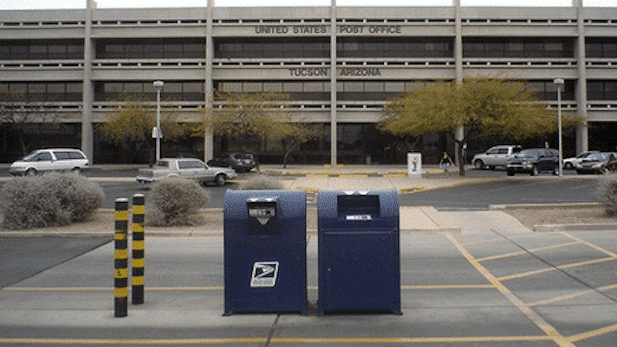 USPS Commits to Take Fresh Look at Postal Plans
March 21, 2016 Press Release
WASHINGTON, D.C. – The United States Postal Service (USPS) on Friday responded to U.S. Rep. McSally’s calls to update studies used to propose the consolidation of postal facilities around the country, including the Cherrybell Postal Processing facility in Tucson. In the response, Deputy Postmaster General Ronald Stroman confirmed that the current studies will be updated and reviewed before any future decisions are made, something Rep. McSally called for in a letter earlier this month. The USPS response also confirmed that previous plans to close down facilities continue to be deferred.

“I’m pleased to see the Postal Service commit to take a fresh look at the situation around the country before making any new decisions related to Cherrybell,” said Rep. McSally. “This commitment is what we fought for last year in appropriations legislation and earlier this month, and is an important victory for Southern Arizona. I’ve worked to highlight in Congress and locally the devastating impact closing Cherrybell would have. As the Postal Service moves forward to revisit its information, I’ll continue to advocate for our community’s needs.”

Earlier this month, Rep. McSally was joined by 33 lawmakers in a letter to Postmaster General Megan Brennan calling for a new look at plans related to the consolidation of postal facilities around the country. The letter followed Rep. McSally’s successful efforts to include in appropriations legislation that was signed into law language encouraging the Postal Service to update past studies used in its decision-making.

Last year, Rep. McSally participated in a roundtable with Councilmember Richard Fimbres and local leaders to coordinate local and federal efforts in support of the Cherrybell Facility’s continued operation. Rep. McSally also toured the Cherrybell Processing Center and led a bipartisan effort by members of the Arizona delegation to call on Postmaster General Brennan to see the facility’s impacts first-hand.

A PDF of the Postal Service’s response can be found HERE.