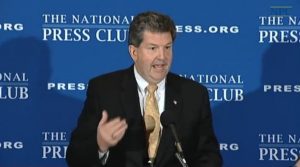 Now that the holiday rush is over, change is afoot in the nation’s mail. On Tuesday, outgoing Postmaster General Patrick Donahoe, who has led the oft-challenged U.S. Postal Service for four years, heads to the National Press Club for some candid talk about the future of an organization that handles 40 percent of the world’s total mail volume – that’s 158 million assorted letters and packages a year. Some change is already underway though. On Monday, the service lowered its standards for mail delivery across the nation – delivery will be slower in some cases – and consolidated some facilities in a prudent cost-cutting measure to counter financial losses of $26 billion in the last three years.

“What about USPS‘ finances? The postal service just reported its best quarter financially in seven years. Yet, USPS has been hobbled by a Congressional requirement to pre-pay billions in retiree healthcare costs,” the service states in advance. “Congress also adjourned last year without approving either new members for USPS Board of Governors or enacting postal reform legislation that was years in the making.”

Mr. Donahoe says he will offer a “frank appraisal on what is working and what needs to be fixed” before he leaves his post in February 1. In the meantime, the postal service brought in $67.3 billion in annual revenue in 2013 and continues to be the nation’s largest retail network – bigger than McDonald’s, Starbucks and Walmart combined domestically, according to its historical data. Though the postal service is nimble with its marketing and public appeal, competition from private package delivery services, email and online bill paying has taken its toll.

It has slimmed down in recent years – consolidating 350 mail-processing facilities, closing 143 plants and trimming 3,800 delivery routes. About 3,000 employees also lost their jobs or had cutbacks in their work hours. The trend has irked the workers, plus a number of Democratic lawmakers; 30 signed a letter to Mr. Donahoe in December advising him to maintain the service’s standards until further studies are done.

“I grew up in small-town Missouri, and I know personally that our postal facilities are more than brick and mortar – they’re the lifeblood of communities across the country. Any CEO will tell you that voluntarily giving up your competitive advantage and lowering standards isn’t a recipe for success,” said Sen. Claire McCaskill of Missouri in a statement at the time.

The postal service – which counted Benjamin Franklin as its first Postmaster General in 1775 – has its take too: “Mail is a great communication tool. No monthly plans. No signal outages. No roaming charges. Regardless of geographic location, anyone can send a letter for just 49¢ to anywhere in the United States, its territories and U.S. military and diplomatic installations worldwide,” the service states in its history.