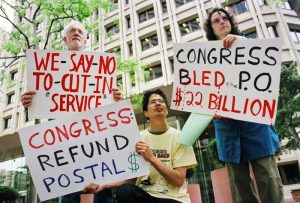 By David Yao – March 4, 2015
Without telling you, the U.S. Postal Service (USPS) has slowed down the mail. New service standards went into effect on Jan. 5, ending overnight delivery of local first-class mail. The slower delivery schedules mean that the public will now see a delay in the delivery of bill payments, greeting cards, medicines, Netflix DVDs, ballots, newspapers and checks.

This cutback of such a basic service is harmful to the public interest. The burden falls particularly on individuals who have the least access to the Internet, especially low-income people or senior citizens who may lack either a computer or the skills to use it. Small businesses will suffer if they are dependent on billing and remittances by mail.

Ruth Y. Goldway, Postal Regulatory Commissioner since 1998, criticized the latest service cut, which “threatens the very integrity and concept of Universal Service — the Postal Service’s primary obligation under the law. Under the law, the Postal Service is required to give the highest consideration to the requirement for the most expeditious collection, transportation, and delivery of important letter mail.”

The slower service is not justified by the stated motivation of saving money. The plan to reduce service standards was hatched in the depths of the Great Recession, but since that time, postal finances have recovered. The USPS has been making an operating profit since October 2012, including a $1.1 billion profit in the quarter ending Dec.31, 2014, and it has seen rising revenues in the last seven quarterly reports.

The supposed losses that are announced by postal headquarters are entirely on paper, a product of a 2006 law that demanded $55 billion in payments to the federal treasury for future retiree benefits, in addition to payments already being made for current retiree benefits. This “pre-funding” imposed by Congress is the real problem and it needs to be eliminated, instead of doing away with speedy mail service.

A potential problem is the specter of voter disenfranchisement. Delays in counting ballots to get election results have led to proposals for an Election Day deadline for receipt of ballots. If that change is made, most people would know that ballots mailed on Election Day would arrive too late to be counted. But thanks to the new delayed mail standards, ballots mailed the Monday before, or even ballots sent as early as the Saturday before, would likely arrive too late.

Eliminating living-wage jobs is not good public policy. The service cuts will result in the July closure of mail processing operations at 82 sites nationwide, including in Tacoma, Redmond and Wenatchee. Around 320 jobs would be affected in Washington state and an estimated 15,000 nationwide.

There is no crisis in postal finances that would dictate such a drastic action as hampering the basic delivery of first-class mail. It is just another quiet step down the path toward austerity, and one more attack on the public good. Moreover, the USPS has proposed further unnecessary cuts, such as reducing delivery days from six to five and ending delivery to customers’ doorsteps. 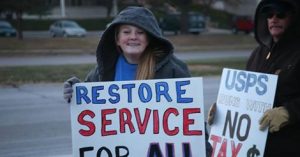 This degradation of a public service can and should be reversed. In February, “A Grand Alliance” of more than 60 organizations formed with the stated purpose “to save our public postal service.” It aims to reverse the tide of cuts. On agrandalliance.org, individuals can sign a pledge “to support the fight to protect and enhance vibrant public postal services now — and for many generations to come.”

In the U.S. House of Representatives, the Protect Overnight Delivery Act (HR 784) has 59 co-sponsors, including Rep. Suzan DelBene, D-Bothell, the only one from Washington state. The non-binding House Resolution 54 has a similar intent, with no state co-sponsors yet.

If you have experienced mail delay, please take time to report it to the Postal Regulatory Commission at prc.gov/contact. And please spread the word: The stealth nature of this broad cut to universal service can be overcome if enough of us raise our voices.

via Recent slowdown of first-class mail delivers bad news to those who rely on postal service | Real Change.