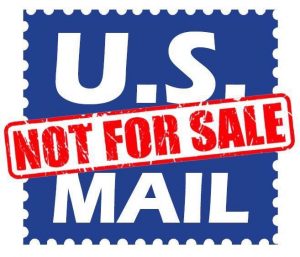 We have seen an escalation of attacks on federal employees from different administrations over the past 30 years. Prison systems, military housing, medical services and other services have been privatized by the US Government. We have seen service become degraded and prices escalate and often times skyrocket on these privatized entities. Is this what the employees and citizens deserve from the U.S. Postal Service?

Mail services around the world have been privatized by their own government. Each time the mail services have been privatized it has failed to deliver the same reliability, productivity and the standards that was given and expected from the government. Citizens worldwide have found that their mail service didn’t improve but the prices rose substantially. It’s not too hard to comprehend that those governments cared more about selling off its services rather than providing for the needs of their own citizens and society as a whole.

Who truly benefits from privatization of government services? The private companies who take over these services are the only ones who benefit. The citizens and economy suffer with higher costs and less service while the private company or businesses profits and dividends go up.

If the PAEA of 2006 was to set aside money for future retiree and future health care costs, why then do we now see legislation that forces retirees into Medicare at the age of 65? We are told that the USPS cannot afford the costs and therefore, with forced Medicare integration it will offset the costs to Medicare. As of September 30, 2016, the USPS reported $286.5 billion in pension plan assets and $51.9 billion in retiree healthcare prefunding, for total assets of nearly $338.4 billion. Ten years after the PAEA of 2006 the USPS still cannot afford retiree and future healthcare costs even though the accounts are in much better financial condition than other government entities. The USPS sets aside $51.9 billion dollars for prefunding, yet newest legislation will push retiree costs off to Medicare. Why would the government and the USPS want to do this?

When a large company or corporation is looking to sell its business, one of the biggest issues for the buyer or investors is the “legacy “costs. A new owner does not want to absorb the healthcare costs and the pension costs of retired employees. The company that is being sold begins the process of finding ways to cut the “legacy “costs so that it has a better chance of being sold in the future. In the case of the USPS it would seem that Congress has introduced legislation that will take retirees and force them into Medicare even if they have opted out. Many do not know that as part of their employment at the USPS, the have the option to opt of Medicare at the age of 65 and can keep their FEHB(which the USPS pays a portion) as their primary insurance. Current proposed legislation takes that option away from the retiree. It forces the retiree to make Medicare its primary insurance while the FEHB is the secondary.

If the proposed legislation is passed, such as HR 756 now known as HR 6076 and S.2629, it is likely that Congress will eventually introduce a bill that will take FEHB away from retirees as they are already receiving Medicare. The USPS pays a portion of the FEHB even through retirement. By cutting FEHB from retirees it will be considered yet another cost cutting measure. Just like any private corporation than is planning a sell off, the USPS is seeing a slow yet steady march towards cutting its “ legacy “ costs.

If there was ever a time to be concerned of privatization of the USPS, the time is now. The Trump administration has shown they will do what they want regardless of public outcry. We have seen a subtle rebrand of the USPS. In the executive order the President issued on the USPS, the US Postal Service was called the US Postal System. This has been repeated in media outlets, news articles and social media. Many may not have noticed this unassuming switch of words. This was not an accident by any stretch of the imagination. The President’s aids and lawyers were well aware of the changing of words. It’s a simple business move, clever one at that. The U.S. Postal Service has been labeled as an organization that financially is in a freefall and not profitable. What company or business would want to invest into a company that has that sort of reputation? It’s also common knowledge that service companies in the United States lose money daily. The simple change of words can and will change ones view. The United States Postal System doesn’t carry the negative stigmata the United States Postal Service does.

2 thoughts on “Privatization: A real threat to the USPS employee”