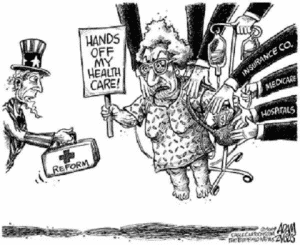 Forcing these changes on retirees after the fact is unacceptable. Willingly advocating for these benefit changes for those who have dedicated 20, 30, and 40+ years of their lives, and now nearing retirement, is unacceptable as well. Our retirees shouldn’t be the red headed step child branch of the federal government. To imply a financial impact will not be realized when forced into Medicare Part B and a form of Part D is….well….I’m just going to say it, a damn lie.

The prefunding issue that was created by the 2006 PAEA could have been taken care of years ago by extending the amortization period from 10 years to a more reasonable time frame of 40-70 years. No other agency or company is required to prefund healthcare for future retirees within a 10 year period.

We were asked just 5-6 years ago to save the USPS via concessionary bargaining. That concessionary bargaining created a two tiered pay scale, loss of a 40 hour work week as full time, and a 20% + non career workforce. Since that concessionary period, Congress failed to take any measures to correct the prefunding amortization period for future retirees healthcare. Therefore, we are still in the same designed trap five years later and are being asked to save the USPS, once again, but now on the back of retirees. Obviously, the perfect storm wasn’t over.

The primary driver for the strangle-hold that has been haunting us is the 2006 PAEA legislation. This strangle-hold is doing exactly what it was designed to do…..suck the lifeblood out of each and every one of us.