By Emily Kopp – January 6, 2014
“Myopia” and “shortsightedness” from postal unions, Congress and the mailing industry are keeping the Postal Service from making changes that would let it survive in the digital era, according to Postmaster General Pat Donahoe.

“That may sound a little harsh, but it would be too easy to say that it’s just congressional gridlock,” Donahoe said Tuesday at the National Press Club, in what was billed as a farewell address. He accused foes of his reforms of trying to hold onto a status quo, whether it be employees’ benefits or the cost of mass mailing, that prevents the agency from evolving rapidly.

After four years at the helm, Donahoe is retiring at the end of this month without being able to convince Congress to pass a law that would let the agency make changes to its employees’ pension and health care obligations, as well as its network and operations. 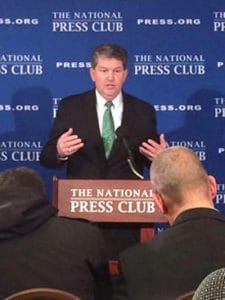 The Postal Service has posted multibillion dollar losses for years now, largely because of a legal requirement to prepay for retirees’ health benefits, unlike other federal agencies. But Donahoe contends the Postal Service could have afforded that cost if the Internet had not intervened. As personal letters, party invitations and greeting cards have gone online, the Postal Service has seen first-class mail volumes drop by a third in the past decade, adding up to a $17 billion loss in annual revenue.

That money is not coming back, he said.

In his last pitch for a new law that would “encourage flexibility in the way we adapt to the marketplace,” Donahoe urged members of the new, Republican- controlled Congress to take a “broader, long-term view.”

Congress should use the Postal Service as a “test bed for the rest of government,” he said.

The federal government, like the Postal Service, is “massively overpaying” for employees and retirees’ health care, he said. An agency proposal to set up a health care plan just for postal employees, removing about 1 million people from the Federal Employees Health Benefits, has met with skepticism from Congress, as well as the Office of Personnel Management , which administers the FEHBP.

Meanwhile, under Donahoe’s watch, the Postal Service has done what it could to trim its network while sampling new ways of making money. It shed more than 200,000 employees, largely through retirements and buyouts. It has closed mail processing centers and reduced window hours at many post offices. It has phased in new, slower requirements for first-class mail, although Donahoe says that change will not impact certain items such as medicine. The Postal Service also has angered its unions by opening counters at Staples stores, in which store clerks rather than postal employees handle transactions.

At the same time, the agency has invested in technology that makes package delivery more efficient. It has added Sunday delivery of packages and even piloted grocery delivery in San Francisco.

The Postal Service recorded a $1.4 billion profit from operations last year, making it the most successful year in the past six.

“If we’d done nothing, Congress would be bailing us out. We made tough decisions based on a long-term view of the organization. We used every flexibility we had. They should let us have more flexibility,” he said.

Donahoe, 59, has spent 37 years with the Postal Service, beginning as a mail clerk in his hometown of Pittsburgh. Recalling the steel industry’s decline and fallout on the local economy, Donahoe says with pride that he has never overseen layoffs at the Postal Service and has always sought to reduce the impact of the changes on employees.

Yet Mark Dimondstein, president of the American Postal Workers Union, calls Donahoe “the worst postmaster general this country has ever seen.” APWU has organized protests outside the Staples stores in attempts to thwart what Dimonstein sees as a move toward privatization and service cuts.

Begrudgingly, he gives Donahoe credit for turning the agency toward package delivery, although he says that probably would have happened under any leader’s watch.

“There’s a package explosion going on,” he said. “The emphasis on packages is fine, but not at the expense of small-town daily newspapers that should be delivered every day. Everything is being slowed down.”

The Postal Board of Governors has chosen Chief Operating Officer Meg Brennan to succeed Donahoe next month. The two have known each other since they both worked for the Postal Service in Lancaster, Pennsylvania, in the 1990s.

Donahoe says he has given Brennan three pieces of advice: stay optimistic, communicate and persevere.

One of Brennan’s first challenges as postmaster general will be negotiating a new contract with APWU, beginning on Feb. 19.

The union has asked Brennan to reverse Donahoe’s initiatives, although, as chief operating officer, she has been at the helm of many of them.

She also will have to restart talks on Capitol Hill about postal legislation. Donahoe says he believes the new, GOP-led Congress eventually will pass a law to give the Postal Service the flexibility it seeks. New chairmen on the House and Senate oversight panels understand the agency needs changes, he said.

“It may not be the first thing, but they’re looking for wins,” he said.

He plans to watch from the sidelines in Pittsburgh, which he still calls home.