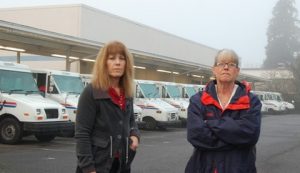 Letter carriers Pam and Gina at a USPS distribution facility near Portland, Oregon

By Hector Cordon – January 10, 2015
The United States Postal Service (USPS) initiated the closure of 82 mail processing facilities nationwide this week. The cuts will impact 15,000 employees and add one to two days to the delivery time of 14 billion pieces of first-class mail each year.

Since 2006, the postal service has consolidated 305 mail-processing plants, shut down or reduced service at thousands of small post offices, dismantled over 23,000 delivery routes and slashed 212,000 jobs.

The number of non-career workers, lacking any health and retirement benefits, has increased by nearly 30 percent since 2012. During that period, USPS’ total operating expense has dropped by $7.8 billion.

The postal service claims that these shutdowns were required due to a significant decline in the volume of first class mail, which has fallen by 35 percent over the past decade, even though demand for parcel shipping has increased with the growing popularity of Internet retail.

WSWS reporters spoke to postal workers at a post office in Davis, California. “We’re becoming slaves,” said Sharon, a letter carrier. “This used to be a good job, but they’re trying to claw us back to working at the minimum wage, while taking away our already meager pensions and benefits. With these most recent cutbacks that are supposed to start within days, they’re barely telling us anything. Everyone is interested and wants to know more, but they’ve barely said anything about it.”