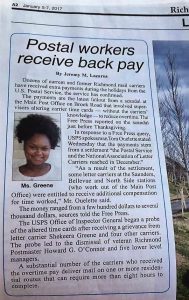 Dozens of current and former Richmond mail carriers have received extra payments during the holidays from the U.S. Postal Service, the service has confirmed.

The payments are the latest fallout from a scandal at the Main Post Office on Brook Road that involved supervisors altering carrier time cards – without the carriers’ knowledge – to reduce overtime. The Free Press reported on the scandal just before Thanksgiving.

In response to a Free Press query, USPS spokesman Tom Ouelette stated Wednesday that the payments stem from a settlement “the Postal Service and the National Association of Letter Carriers reached in December.”

“As a result of the settlement, some letter carriers at the Saunders, Bellevue and North Side stations (who work out of the Main Post Office) were entitled to receive additional compensation for the overtime worked,” Mr. Oulette said.

The USPS Office of Inspector General began a probe of the altered time cards after receiving a grievance from letter carrier Shekeera Greene and four other carriers. The probe led to the dismissal of veteran Richmond Postmaster Howard G. O’Connor and five lower level managers.

A substantial number of the carriers who received the overtime pay deliver mail on one or more residential routes that can require more than eight hours to complete.